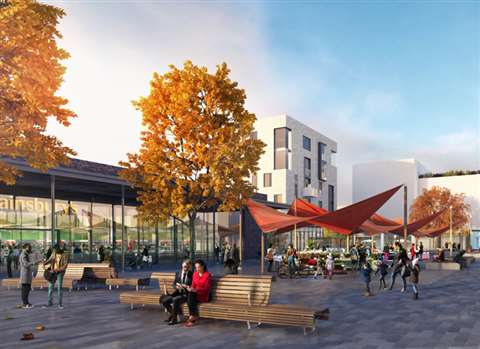 A major €100 million contract has been awarded to BAM as part of an initial phase of the £1billion (€1.24 billion) North West Cambridge development.

The project, which includes the creation of 352 homes for Cambridge University staff and key workers, will form the first element of a new community named Eddington.

It will feature a range of retail units, doctors’ surgery and the preliminary works for an energy centre serving the site – which will be created to BREEAM environmental excellence standards.

Work on the development - designed by Wilkinson Eyre and Mole architects - is expected to commence this autumn, after winning planning permission earlier this year. It is due for completion in 2017.

Tenders for the project were unveiled in September, with a total of 18 companies including Bouygues, Galliford Try and Kier chosen to deliver individual aspects of the scheme.

It is expected the 150-hectare site of university-owned farmland will eventually feature a total of 3,000 homes, as well as research facilities and accommodation for students.

Gavin Heaphy, construction director of the North West Cambridge development, said, “BAM’s considerable experience in the realisation of large and complex projects, coupled with their commitment to sustainable delivery made them the right choice to become our partner for two major lots on the development (lots 1 and 3).

“This particular project holds many of the key local centre elements of phase one, delivering a supermarket, energy centre, healthcare facility and key worker housing.”