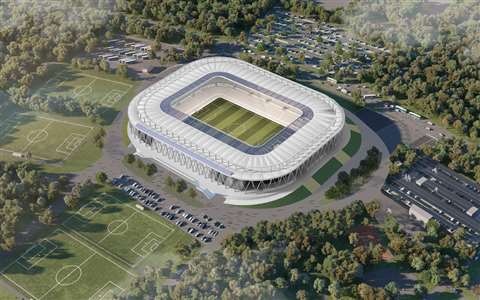 An artists’s impression of the new Karlsruhe stadium

Bam Sports – a subsidiary of Bam Deutschland which specialises in the construction of stadiums – has been awarded the contract for the complete renewal of Wildparkstadion in Karlsruhe, situated in the south west of Germany.

The stadium is the home of Karlsruher SC football club, which plays in the 3. Liga – the third division of the German league. The contract by the City of Karlsruhe includes demolition of the original 1955 stadium and construction of a new stadium for more than 34,000 spectators, with a VIP area, club offices and a fan shop.

The contract value is put at approximately €100 million.

Bam Deutschland will deliver the project, and the pitch will remain in use during construction. The stadium will be completed in 2022 and the architect behind the design is agn.

It features a structure of Y-shaped beams to support the stadium roof, which it is said will give the complex a “distinctive” architectural appearance.

In recent years, Bam Sports has also delivered stadiums in the German towns of Dresden, Mainz and Augsburg.