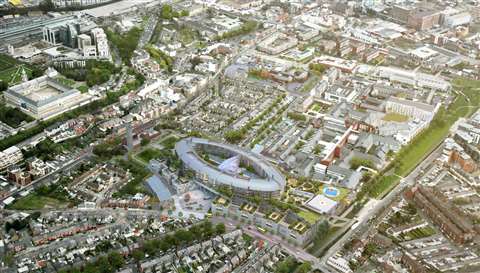 New children’s hospital to be built in Dublin, Ireland, by BAM

Following a comprehensive tendering process, BAM Building, the Irish building subsidiary of Dutch-based contractor Royal BAM Group, announced that it has been awarded a €600 million build-only contract for the new children’s hospital project in Dublin, Ireland.

Said to be the largest public construction project awarded in Ireland, full planning permission for the hospital, two paediatric outpatients and urgent care centres, a children’s research and innovation ientre, and a 53-unit family accommodation centre was granted in April 2016.

The new hospital is set to include more than 6,150 rooms, 1.62ha of outdoor gardens and external space, and 380 individual inpatient rooms, each with its own en-suite and a bed for parents to sleep near their sick child.

With the 86ha site on the St James’ Hospital campus now fully cleared in preparation for the laying of foundations, the full project is expected to take four years to complete.