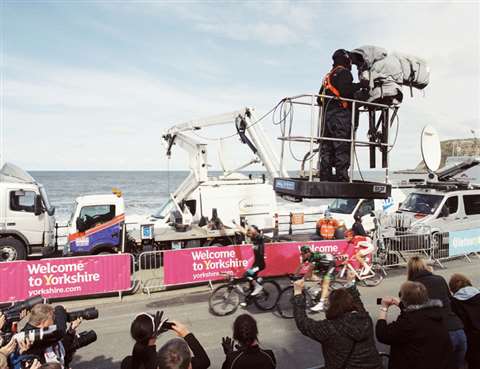 A Wilson Access Hire truck mounted platform enabled a TV production company to get close up views of competitors in all three stages of the
first-ever Tour de Yorkshire cycling race.

Kutunak Prod hired the 20.7m articulated truck mount over the three days of the race to film the cyclists crossing the finishing lines in Scarborough, York and Leeds.

The 10 m working outreach of the CTE ZED 21 JH Nissan truck mount was particularly important as it allowed the cameraman to be positioned above the centre of the road to capture the cyclists as they crossed the finish line.

The weight capacity of the basket was also an important consideration when specifying the truck mount – its 300kg capacity was sufficient to carry the cameraman and his equipment.

Wilson Access Hire, which gained the contract on recommendation from another customer in the region, provided an operator, Danny Perkins, at each of the three locations.

Wilson Access Hire driver and operator Danny Perkins, who was on site throughout the event, said, “The Nissan truck mount is a compact vehicle and this made it ideal for manoeuvring and parking as it was very busy at the finishing lines.”