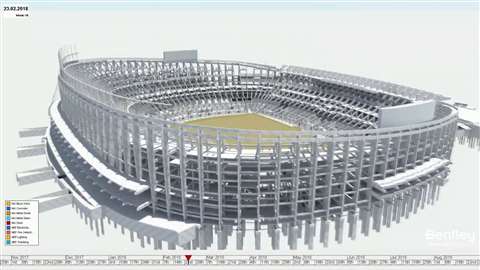 The Synchro stadium plans for Barcelona

A cloud-based 4D construction modelling solution that will be used for FC Barcelona’s major renovation to the Espai Barça sports arena in Barcelona, Spain, was presented at Microsoft Inspire, the technology giant’s annual partner conference in Las Vegas, US.

Bentley Systems, the US-based provider of comprehensive software solutions for advancing infrastructure, presented Synchro during the mixed reality (MR) and the cloud session at the conference.

The Microsoft Inspire session, led by Microsoft’s Nancy Li, detailed how Bentley’s Synchro, a cloud-based 4D construction modelling solution, will be used for FC Barcelona’s major renovation to the Espai Barça sports arena, which includes a new Camp Nou – the home of the Barcelona football club – which when completed will accommodate more than 100,000 fans.

The term 4D in BIM (building information modelling) refers to 3D software which also includes a schedule by adding the fourth dimension – time.

In conjunction with time-lapse monitoring footage of the construction site provided by EarthCam, Bentley’s Synchro aims to help the stadium project team to visualise and compare construction progress with the 4D construction model. 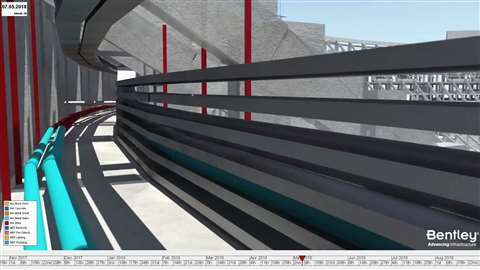 Greg Demchak, technical architect for Bentley, said, “The scope of this project demands that we look for new solutions, and for this, we turned to Microsoft.

“Using Azure infrastructure, HoloLens technology and Cognitive Services, multiple users can interact with a holographic representation of the stadium data at any moment in the construction process. We are also leveraging machine learning and on-site images to digitally track actual progress with Synchro.”

Bentley Systems recently acquired Synchro Software, headquartered in London, UK, which claims to be the leader and the market creator in 4D construction modelling software for scheduling and project management.

It said that with construction project management in 4D, benefits of BIM could extend throughout infrastructure project delivery and asset lifecycles, as traditionally disconnected workflows become digital workflows.

Click here to view a video of the project.