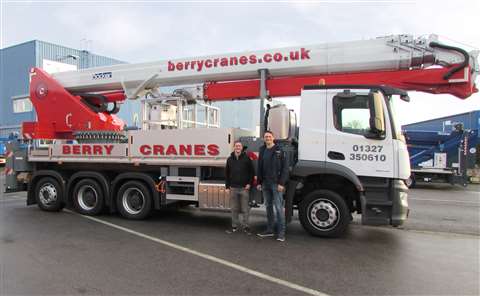 Rental company Berry Cranes in the UK has expanded its fleet with a new AK 52 truck crane from German manufacturer Böcker.

It lifts 12 tonnes and has a 52 metre aluminium boom. A 1 tonne load can be lifted to 34 metres and the outriggers can be set at different extension lengths to maximise capability in the available footprint. Its 14 metre hydraulic jib can lift 1 tonne extended horizontally. Conversion into an aerial work platform with personnel basket can be done easily and quickly without tools, the manufacturer said.

The AK 52 is mounted on a four axle truck chassis, unlike another AK 52, in the Berry fleet for the last year. That one is on a three axle chassis. On three axles it is in the 26 tonne category and 32 tonnes on four axles.