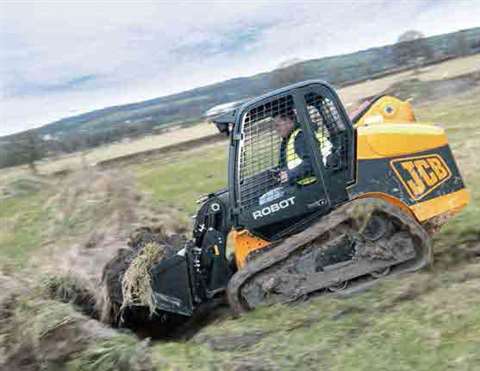 In recent years sales of mini excavators have been bolstered by Europe's rental sector. David Philips, managing director of Off Highway Research (OHR) said; “It is the one product that continues to confound the forecasters. Sales registered an increase of +12% from 2001 to 2004, instead of the decline of 4000 units that was expected at the beginning of this year.”

Mr Philips told CE that nearly half of the additional volume came from France, where the rental industry “repented of having not bought enough units in 2002/2003 and chose to spend its income from house builders above all on mini excavators.”Elsewhere, Italy contributed 20% of the increase, while the remaining 33% was spread across a wide range of countries.

“The disappointments came with the small increase in Spain, which seems certain that it wants to continue its love affair with the backhoe loader; and the stagnating of volume in the formerly enthusiastic market of Switzerland,”said Mr Philips.

“The recent growth [of mini excavators] is no longer sustainable and many countries are likely to post declines in 2005 and 2006. While the market is set to cool off over the next few years, it will be a relatively modest downturn,”said Mr Philips.

However, this has not stopped equipment manufacturers from launching new machines or upgrading existing models. JCB, for example, has launched a new range of 1,5 tonne mini excavators in the shape of the 8014, 8016 and 8018, with a new upper structure, new cab, new hydraulics and controls with power coming from a 1,1 litre Tier II/Stage 2 compliant engine.

The 8014 is designed as an entry level machine with a fixed undercarriage. The mid-range 8016 has a longer fixed undercarriage, a 14 kW engine and full options package. The top specification machine, the 8018, uses the same engine as the 8016 but offers an extending undercarriage to enhance stability.

A larger dig end, hydraulic rams and hydraulic flow result in a larger digging envelope and +20% greater breakout forces. The 801 series feature what JCB claims are a number of innovative features. The boom, for example, is tubular in design, giving a light but rigid structure to provide high levels of durability and strength.

The one-piece, cast slew frame allows the engine to be positioned longitudinally, in turn allowing the fuel and hydraulic tanks to be placed at the rear as opposed to in the centre, as is traditional. This shifts weight to the rear, contributing to stability when digging and avoiding the need for greater counter-weighting.

Elsewhere, Kubota has enlarged its KX-3 Series with the introduction of two ‘new’improved machines, the 2,6 tonne KX61-3 and the 2,8 tonne KX71-3, which replace the -2 Series machines.

The new models also have bucket cylinder hoses routed through the arm, and boom cylinders shielded by a thick steel plate for extra safety and protection. They are available with either a quiet “luxury”cab or canopy, both of which meet current ROPS/FOPS specifications.

Other features on the R15-7, R28-7 and R37-7 include a reinforced bucket, which is made of thicker steel and has an additional lateral plate. A boom cylinder guard also comes as standard, and an applied side protector prevents damage to the engine hood when the machine turns.

Reduced and zero tail swing first proved popular in Japan before starting to make an impact in Europe in the late-1990s. On zero tail swing excavators the counterweight does not extend beyond the footprint of the track. This allows them to work in cramped spaces, without fear of accidentally hitting a person or object when slewing the upper structure. It is also a useful feature in applications like road work, because the reduced working envelope often means only one lane has to be closed to traffic.

Ammann-Yanmar's claims to have invented the zero tail swing concept and its “Global ViO”series is now in its third generation.

“Unlike most other mini excavators Global ViO machines truly have zero tail swing: neither the counterweight nor the front parts of the upper frame overhang their traks. The driver therefore has excellent visibility in all directions, a factor that can only increase his productivity,”said a company spokesman.

The machine also uses the company's VIPPS hydraulic system, which enables the machine's operator to work faster and with more precision, while the VICTAS undercarriage system uses asymmetric tracks for better lateral stability.

With a heavy track frame and counterweight for improved stability, the new machines have a lighter swing post placed closer towards the centre of the machine. Another key design goal was improved durability, achieved through the use of a one pin system that reduces swing pin jerking and D-shaped protection on the front corners of the machine.

New from Bobcat is the 323 mini, which replaces its 322 model. Incorporating a new advanced variable displacement hydraulic system, it is equipped with a dual outlet torque limiting piston pump that can sense and react to hydraulic loads.

Another new mini from Bobcat is its zero tail swing conventional drive 430, which completes the 430/435 family. The 430 and 435 are also available as conventional drive units or with the company's Fast Track drive system, which gives the machines a top speed of 8 and 8,7 km/hour respectively.

According to the company, one of the main advantages of its Fast Track over a conventional drive system is that the drive transmission has no impact on the hydraulic flow available for the attachment. Maximum flow is therefore available even when driving at maximum speed.

Moving up the weight class is Hyundai's R55-7 (5,7 tonne) mini excavator, which comes in either tracked or wheeled versions (R55-7W). Powered by a Yanmar 4TNV94L engine (43 kW) it includes several features designed to provide maximum safety during operation and extend working life. These include a reinforced bucket and arm and applied slope type side members, which prevents soil stocking.

Designed for work in congested residential and urban areas the R55-7's boom can be offset within a range of 130°, while track width is 1,92 m.

Komatu's MR-2 series of compact excavators has been extended by the addition of two new machines, the PC18MR-2 and PC20MR-2. These offer wider working ranges, increased digging and lifting forces, improved comfort and safety, and easy maintenance. Weighing in at 1,86 and 2,3 tonnes respectively, they are powered by 11 kW and 15,5 kW Komatsu engines.

Takeuchi's mini excavators range from the micro TB108 (835 kg), which is capable of entering a building through a normal doorway, up to the TB175 at nearly 7,5 tonnes.

The 7,5 tonne TB175W, introduced in 2002 and the company's smallest wheeled excavator, is the largest member of the 100 Series. It shares most of the same features of the other 100 Series machines - two speed travel, TOPS/FOPS cab, variable flow hydraulics and servo controls - with the exception of the tilting cab module.

Like mini excavators, skid steer loaders have undergone an interesting design re-think in recent years. Many manufacturers now offer tracked loaders, which are essentially their skid-steer models mounted on a dozer-like undercarriage, rather than wheels. This improves traction and reduces bearing pressure, with the machines’weight spread over a bigger ground contact area, improving ‘floatation’in poor ground conditions. The downside to such loaders is their slower travel speed due to the inherently slower-moving tracked undercarriage.

Gehl, Caterpillar, Bobcat and Komatsu are among the companies that offer such machines at the moment, and it seems likely that more will follow, thanks to the relatively quick acceptance of the concept.

Traditional skid steer loaders remain popular in most European markets, and there are plenty of new models on the market this year as testament to this. Case has renewed its range recently, with the machines like the 440 being seen for the first time at this spring's SMOPyC and Samoter exhibitions.

Another new name to skid steer loader buyers is Hyundai, which signed an agreement at the start of the year to sell Canada-based Thomas equipment's full range of skid steers under the Hyundai brand.

The first two machines will replace the company's existing 2064 and 2074 models, and Mustang has also taken the opportunity to completely redesign the operator's compartment for greater comfort and efficiency.

New from JCB is the Robot 180T skid steer loader. It has an operating load of 820 kg and features a Stage 2/Tier II compliant, 44,7 kW turbo charged engine.

Other features include servo controls for the loader and the machine's transmission, plus a high flow pump flow of 115 litres/minute at 205 bar. Its narrow dimensions - 1,68 m wide and a turning radius of 2,06 m - allow it to operate on extremely cramped sites.

The quick-change Bob-Tach attachment mounting frame comes as standard. However, customers can choose the optional Power Bob-Tach system to change non-hydraulic attachments simply by flipping a switch inside the cab.

An easy to read instrumentation is arranged in two groups in convenient locations at the front of the cab, one in the top left hand corner and the other in the top right. Other options include Gehl's 4640 has a 45 kW engine and an operating weight of 3,3 tonnes.

Advanced Hand Controls (AHC) and the Advanced Control System (ACS) for foot or hand control of lift and tilt functions and a back-up alarm.

A vertical lift path skid-steer, with multiple-linkage boom arms, the S205 combines a reach of 0,75 m with a lift height of 3 m. The dual tilt cylinder design on the boom arms provides increased roll back power for digging and loading applications.

Able to use 45 attachments it is available in two versions; standard flow (62 litres/minute) and optional high-flow (97 litres/minute).

“To the delight of those who like to see an economic cycle at work, both markets came back in 2004. A +10% rise in Germany may not seem to compare with the +53% that happened in France, but both brought roughly the same amount of extra machines down the assembly lines,”said OHR's Mr Philips.

Equipped with a delta boom to provide maximum visibility from the cab, the machines offer a high dumping height of 2,44 m and long bucket reach.

The Z-bar linkage, cab and body have all been designed to provide the maximum of visibility for the driver when in use. Pilot hydraulics are used for the joystick implement control, with proportional electro-hydraulics on the auxiliary circuit.

Another compact wheeled loader is JCB's 407 ZX. The 4,8 tonne, 50,2 kW Stage 2/Tier II compliant machine features portal axles mounted directly on the main frame ensuring excellent stability and ground clearance. Other features include self-limiting slip differentials in the front and rear axles for efficient power transfer to each wheel for good grip even on slippery surfaces.

The 407 ZX is equipped with a 0,8 m3 bucket and Z-kinematics. An integrated hydraulic quick hitch device allows fast switching from bucket to pallet fork, street cleaning machine or other work attachments.

Engines rated from 25 to 50 kW are generally found in machines of about 2,5 to 8 tonnes operating weight, so this will encompass a huge section of the compact equipment market. The implications for machine buyers and users will be significant, assuming there are lots of new models due to hit the market early next year.

Machines with more sophisticated Stage IIIA engines may prove to be more productive than their Stage II counterparts, so there may be an opportunity to gain competitive advantage. On the other hand, Stage IIIA machines will doubtless be more expensive because of this sophistication, and there may be ‘end of line’bargains to be had on the last of the Stage II models.

The exact situation will doubtless become clearer at the Intermat exhibition in Paris, France next April, where manufacturers are likely to introduce any new models.