Bigger is better for Allu 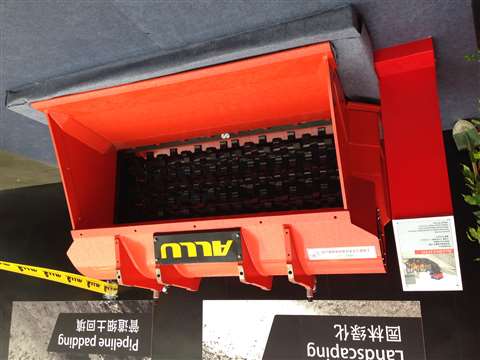 An Allu crusher screener bucket on display at Bain's China

Finnish manufacturer Allu showcased its range of equipment at Bauma China, including its biggest ever screener crusher, the G 4-32 F.

At around 30 tonnes, the bucket has the capacity to deliver a payload of 50 tonnes, said the firm’s president Ola Ulmala.

In his press conference, he discussed operating procedures that could save customers money, while being environmentally friendly. “Instead of transporting material out and bringing new material in,” he said, “we save the material we have and save cost and the environment by reusing it.”

“We have a slogan,” he said, “which is ‘trash to cash’. If you have a pile of rubble, you can screen that to be reusable, instead of taking it to the dump yard, saving the environment and saving money.”

Allu has been operating in China for 20 years and Ulmala said he was proud to announce 200% year-on-year growth for the business.

Speaking at the show, however, issues such as safety and adding value to customers was at the top of his agenda. “Equipment is important,” he said, “but adding value is the key.”

On the company’s safety record, Ulmala pointed out that in over a million working hours over the past two years, there have been zero hours lost to injuries. “Safety as priority, is our way of doing business.”