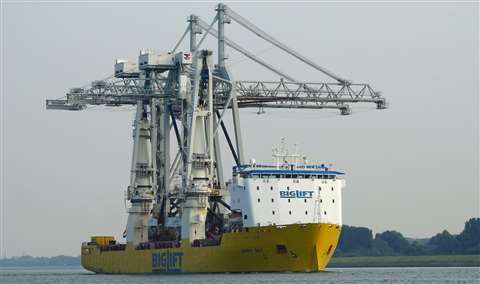 BigLift Shipping’s Happy Sky has finished discharging two large STS container cranes in Vigo, Spain. Until last year, the container cranes served the then home terminal of container handling company ECT in Rotterdam. The cranes were sold to Davila Group and will be operated on the Termavi container terminal in Vigo.

The engineers of both BigLift and the client, Altius SA, meticulously prepared for this move with its many challenges. The cranes’ enormous sizes and their large weights required extra attention in an extensive trail of preparation. The cranes are more than 60 metres high, 86 m wide and 15.25 m between rails. During transport they had an overhang of 58 m in total – 40 m on port side and 18 m on starboard side. Each crane weighs more than 800 tonnes.

As cranes are not designed to be transported by sea, it was necessary to reinforce them to withstand the accelerations and forces occurring during the voyage. A total of 80 tonnes of additional steel was fitted in each crane to strengthen it.

As the cranes’ centre of gravity is high, the lifting operation required cranes with a sufficient lifting height. Happy Sky’s two 900 tonne heavy lift mast cranes offer this. Their excellent stability also enables such loading and discharge operations to be achieved without the need for stability pontoons.