After being in quarantine for many weeks, the ConExpo show in Las Vegas, USA, seems like a long time ago. Time has been filled with daily management calls regarding Covid-19 “essential business” and employee, customer and vendor safety. A fire hose of information to consume daily from the CDC, federal, state, county and city governments, AED, SCR&A and other groups, before one turns to the spigot from outside counsel for the stream of emails regarding Covid analysis, interpretation and guidance. I am sure it has been the same for everyone else in our industry.

Flying into Las Vegas the Friday before ConExpo 2020 opened, I had already been skirting the Covid-19 crisis for two months. Late January found me in Seattle to photograph owls in the Skagit Valley, just as the Seattle airport became one of a small number of airports in the USA to accept travellers from China. Early February found me on a cruise ship for a three-week trek around Australia and New Zealand. By the time I got on the plane for Vegas, I had my Purell packed and was washing my hands at a personal lifetime best, but thinking it still was not good enough.

Photographing any large trade show is always a challenge. Cranes in close quarters make it hard to isolate particular models, and each booth setup lends itself to better images at different times of the day because of the light. This year, a completely new location basically threw all the experience from shooting the last three ConExpos out the window. Dodging the last-minute fevered construction at booths and exhibits, I spent several hours over the weekend relearning light patterns and booth locations. By Monday a semblance of a shooting schedule started falling into place overlaid with a schedule of press conferences and regular company business appointments. Just another chaotic ConExpo, or so I thought.

Despite some excellent Las Vegas weather on the weekend, the first official day of the show, Tuesday, opened to rain and overcast skies. So much for the homework over the weekend. Over the next two days, the sun slowly appeared through the cloud cover for longer periods. Shooting conditions started to resemble past ConExpos. For anyone photographing the show, however, the erratic weather in the early days of the show minimised many outside photo opportunities. After all, there’s nothing more appealing than a photograph of a new crane model in grey skies and puddles around the outriggers. By Thursday, with better weather, photographers were shifting into overdrive to capture the show.

Reflecting on ConExpo 2020, one crane executive I spoke to described the show as feeling as if he was in a bubble or a domed city – within the show everyone was focused on equipment and Vegas, while outside the show, the country’s focus was on Covid-19. Attendance was better than we all expected with a reported 130,000 registrations. Exhibits and booths were busy each day, and the manufacturers I spoke to all reported a steady schedule of appointments with customers and distributors as well as a strong interest in the new crane models being exhibited. Actually, maybe we were in a bubble.

If I had to describe ConExpo 2020 in one word I would use “distracted.” Whether it was the early cancellations of exhibitors and attendees before the show started, the daily Covid-19 count on the news, the new protocols of elbow knocks and hand sanitiser stations throughout the grounds, or making the national news as the last large gathering in the USA, distractions were a constant while the show went on. And all of this surrealistically occurring within a town that had not quite gotten the social distancing message, with casinos and Las Vegas streets packed with visitors throughout the week. The last hurrah before the town would be virtually shut down after we left.

When I arrived in Las Vegas there were fewer than 200 Covid-19 cases in the USA; by the time I left there were about 1,600. By mid-week of the show, some companies had started recalling employees. International attendees started to return home early, concerned that if they waited, they would not be able to leave. With daily media briefings increasingly focused on Covid-19, it was not a surprise that by the end of the week, ConExpo closed a day early.

At this writing in early April, its too early to see the “end of the tunnel,” but as we adapt to deal with the crisis, it is my hope that all of you in the industry and your families stay safe and healthy.

ABOUT THE AUTHOR AND PHOTOGRAPHER 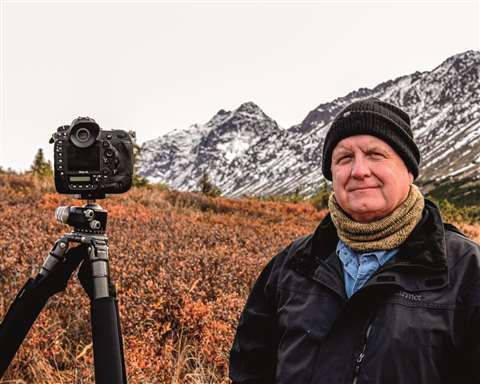 Celebrating over 35 years with Scott-Macon Equipment, Bob Dimmitt is a respected photographer and author who has written articles on travel photography and destinations that feature his images. He has been published extensively for his work with commercial subjects, most notably cranes and other lifting equipment, and his images hang in corporate offices throughout the United States. Dimmitt is also passionate about wildlife and landscape photography, especially within the National Parks and National Wildlife Refuge System. He uses Nikon camera bodies, lenses and flash systems and is a member of Nikon Professional Services. For ConExpo 2020, Bob relied on the Nikon D5 and Z6 camera bodies and Nikon’s 14-24 mm, Z24-70 mm and 80-400 mm lenses.