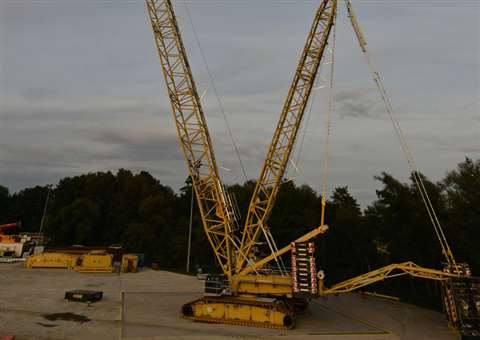 It follows on from the original Boom Booster for the much larger CC 8800-1 model, announced in IC January 2014 news, page 7 and featured in IC April 2014. It is a kit to make a wider boom that increases lift capacity and height, making the crane more cost-effective, the manufacturer said.

The system increases the main boom’s stiffness, raising the crane’s lifting capacity by as much as 30 %, Terex Cranes told IC. Maximum hook height is 174 m and capacity is 80 tonnes. The increase puts the 3800 in the 750 tonne class, Terex said. It allows erection of wind turbines to 140 m tall or more.

Kits for the Superlift 3800 are available with new cranes or for retrofit to existing units. They are either 24 or 84 metres long, assembled from up to seven new larger lattice boom sections in 12 m lengths. The new boom sections are 3.5 m wide for easy transport. This is helped by the fact that two boom sections can be transported inside the Boom Booster kit to save one truck load.

An option is the Superlift Split Tray with quick coupling. It can be used with or without the Boom Booster. Once the main boom is set up some counterweight is no longer required. It can easily be uncoupled, Terex said, after which the crane can move with only the superlift counterweight still required. Assembly time is reduced and fewer people are needed. An assist crane is no longer needed for this part of the job, saving up to €10,000, the manufacturer said.

Maximum superlift radius can be increased from 19 to 21 m, using a 3.5 m mast extension, so long booms can be raised from the ground without an assist crane. Instead of using a hydraulic cylinder the Flex Frame feature allows adjustment of superlift radius from 13 to 21 m with full counterweight remaining on board.

For travel between turbines an adapter frame on the end of the boom allows it to move with a maximum of 94.5 m. “This saves between four and five hours of disassembly and assembly time total, making another significant contribution to cost-effectiveness,” said Guntram Jakobs, Terex Cranes product marketing manager.

Also available is a new, higher-capacity double hook block to go with the Boom Booster. It allows an additional 2 m lifting height and has a capacity of 2 x 90 tonnes (two hoist winches as standard) so there is also a higher lifting speed.