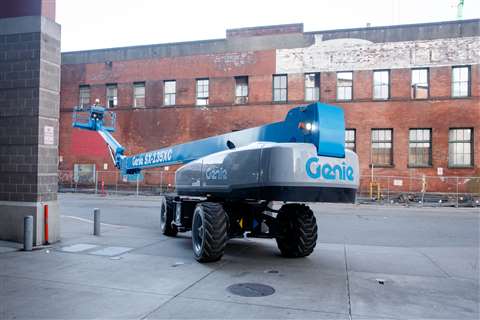 To address these envelopes and capacities, Genie is in the works of revamping and updating its entire boom lift line. Pictured here is the SX-135XC.

The boom lift industry is preparing for some hefty changes in the coming year, with the new ANSI A92 standards dictating platform capacities, load sense and more.

The new design standards, which will be introduced sometime in the coming months, with a 12 month compliance deadline for OEMs, are likely to lead to the use of platform load sensors, automatic envelope control systems and dual capacity ratings on booms.

The new standards will align U.S. and Canadian requirements with current ISO standards used in the rest of the world, and will harmonize how OEMs treat issues such as wind, tilt and rated capacity.

The new design requirements for rated capacity will require the use of load sensors – as has been the practice in Europe for around 15 years – and will probably lead to the use of more sophisticated control systems and dual capacity machines with automatic envelope control.

“The standard 500 pound capacity rating [on booms] won’t cut it anymore,” says Chad Hislop, Genie director of engineering, Terex AWP. “With load sensors, people will not be able to do the work that they do today….I would expect to see full load capacities to go up, and I would expect also more secondary envelopes.”

Hislop says it is likely that booms would operate with 660 pound capacities at the full outreach plus an additional 1000 pound rating on a smaller working envelope.

To address these envelopes and capacities, Genie is in the works of revamping and updating its entire boom lift line. The new XC (Xtra Capacity) booms will provide unrestricted range of motion with platform capacities of 660 pounds and a restricted operating envelope capacity of 1,000 pounds. The first boom to be introduced in the XC family was the SX-135XC, which offers 90 feet of outreach and the ability to work 19 feet, 8 inches below grade. The 135-foot working height boom is currently in production.

The new Genie SX-105 XC and SX-125 XC booms are engineered to work in more applications that require higher capacities. With the dual lift capacity, the new XC boom lifts are geared toward heavy lifting in the construction and maintenance of stadium and sports arenas, gas and oil refineries, industrial and telecommunications applications.

“We continue to look at where our innovative solutions to unique job conditions can be applied across more than just a single product,” says Adam Hailey, Genie director of product management, Terex AWP. “As the new ANSI and CSA standards are implemented across the North American AWP market in the next year, aerial OEMs, including Genie, will be redesigning machines to comply with the updated North American standards and to meet the upcoming recertification requirements. It is our goal that the impacts of the changes are seamless.”

‘Seamless,’ seems to be an appropriate approach to the ANSI changes. Matthew Elvin, CEO of Snorkel, says his company’s transition will be smooth.

“There will be minimal changes to our telescopic boom line, but it will harmonize our North American models with our standard European/Australian products,” Elvin says.

Snorkel introduced a new line of mid-size telescopic boom lifts in 2016, with the official global launch taking place at Bauma 2016. One of the company’s major developments was the introduction to its entire telescopic and articulated boom family (above 40 feet) of its Snorkel Guard secondary guarding as standard.

“Customers are looking for additional features to be built into telescopic booms that help to improve both safety and productivity on the jobsite,” Elvin says. “Following the introduction of our new mid-size telescopic boom lift family, our engineering team will be looking to redevelop the Snorkel big boom (above 80 feet) family, in the next few years.”

Of course, some of the newest units and most major news to hit the access market of late is the addition of another manufacturer entering the ring. JCB will debut a number of new access products in 2017, including 10 diesel telescopic booms from 67 feet (20.6m) to 136 feet (41.6m). All the products will be produced in China. The manufacturer has a dedicated production line there but not in its own factory. JCB is looking to firm up the partnership in the near future.

“They had been saying to us for a number of years, ‘There is one area of the business that you don’t deal with, and it’s the access sector,’” he says. “It was a logical extension; we had been busy growing our product range over the years in the construction and agriculture sectors but the noise escalated - the number of customers who said, ‘You should be in this sector because it has so many synergies with products you already supply’. It was a no-brainier in reality, and we set about it.”

However, market conditions in the coming year could prove difficult for all manufacturers, some are warning.

The market is seeing a lot of pressure from a few different directions, according to Hailey with Genie.

“In the U.S., utilization and rental rates continue to make headway from their lows during the downturn, albeit slowly — this means that our customers are making more purchasing decisions that are opportunistic as opposed to long-term growth planning,” Hailey says. “The uncertainty of key political situations worldwide seems to temper buying decisions. Improvement in the oil and gas markets, continued steady growth in construction and infrastructure work and certainty on the political front should help smooth the noise seen in today’s market.”

Claire Jougleux, product manager for Haulotte Group, says the telescopic boom segment is mainly driven by the U.S. market, and the majority of telescopic booms sold are less than 67 feet.

“This sales performance can be explained by the fact that this market is driven by residential and non-residential construction and maintenance applications, and can be mainly covered with telescopic booms less than 67 feet of height,” Jougleux says. “However, over the past few years, we have observed a clear and steady increase in demand for 80 to 85-foot booms dedicated to the non-residential applications.”

With these applications, the company experienced seven years of continuous growth in the telescopic boom market, but that North American fleet replacement demand softened in 2016 and Jougleux says Haulotte expects a continuation of such in 2017.

While markets globally might be tight in the immediate future, there is certainly a substantial capacity for new boom sales, particularly in the U.S. and China, which have been historically strong in the telescopic boom demand. China has a demand largely defined by the increased focus on safer work practices, replacing many primitive construction techniques with aerial work platforms. And as infrastructure spending and growth in the housing and industrial sectors rebounds across the U.S., the need for high capacity booms tracks accordingly.

Not all songs are similar, however. Gary Crook, vice president of engineering at MEC Aerial Work Platforms, says the market for telescopic booms is buoyant for MEC.

“The forecast remains positive through 2017,” Crook says. “Telescopic booms are an essential tool in any infrastructure project and the prospects for growth in that sector are strong.”

MEC only has one telescopic boom in its fleet, the 60-J, which features 60 feet of working height.

“This is gaining market share through being a feature-rich machine at such value,” Crook says. “Weighing just 17,600 pounds (7980 Kgs), it is the only engine powered 60-foot telescopic boom that can legally fit two on a truck.”

Back at Snorkel, Elvin echoes the overall sentiment that the market saw a decline during 2015 to 2016. However, he says, larger projects scheduled for 2017 have increased demand in the U.S. market for telescopic booms.

“In particular, demand for telescopic booms with jibs is on the rise, to support some of the more complex architectural projects that are currently under construction,” Elvin says. “The jib allows for the telescopic boom to reach within new construction projects or existing project maintenance areas that require additional clearance from obstacles.”

Elvin says the economic and political indicators have provided an overall positive outlook for Snorkel’s boom line in 2017, with financial institutions showing a willingness to fund equipment packages.

“At Snorkel, we are continuing to invest in the expansion of our sales and service teams to meet customer demand,” he says.

Skyjack is in a similar situation, admitting 2016 wasn’t a gangbuster year, but the company sees positivity for the coming 18 months.

“The demand for telescopic booms is still quite significant, but in comparison to previous years, demand did take a bit of a dip in 2016,” says Corey Connolly, product manager, Skyjack. “This was more of a global trend than isolated to a specific area, however with large rental companies in North America delaying a lot of their spending and demand and market size for telescopic booms being greater in North America it is not surprising to see this slight regression.”

The company says demand in 2017 will likely meet or slightly exceed the demand of 2016.

“The implementation of the ANSI standards and the timing of it will likely impact customer demand and potentially shift their buying period,” says Connolly.

In 2015, Skyjack launched its 82- and 86-foot telescopic booms, the SJ82 T and SJ86 T. When the company looked at what existed in the market it says it was determined to enter the 80-foot class with a machine that not only offered key Skyjack design features but also had an aggressive reach envelope with a dual capacity rating.

“We feel that these two models met those goals,” says Connolly.

“Pairing these features with 82-foot and 86-foot platform heights and a dual capacity rating should offer users the perfect solution to any of their 80’ telescopic boom needs,” Connolly says. “As Skyjack continues to fill out its boom product offering it should be no surprise that after launching our 80-foot telescopic booms we will be looking to the 100-foot-and-up classes in the coming years.”

More movement in the market comes from Genie, which says nearly all categories of its telescopic booms are making headway, albeit slowly.

“Machines with strong performance and versatile capabilities, such as our Genie S-65 Trax boom, continue to see strength in both utilization and rental rates,” Hailey says.

Genie’s S-65 Trax boom features a four-point Trax track drive system for improved terrainability and reduced damage to sensitive ground surfaces. The unit has a 66-foot working height with a horizontal outreach of 50 feet, 10 inches and lift capacity of 1,000 pounds/500 pounds. An active oscillation axle system senses the terrain and adjusts the axle position based on ground conditions.

For MEC, the company says its customers dictated some of its latest products and updates.

“Our customers asked for electric-powered versions [of booms] and then quickly after, a hybrid version that has an extended duty cycle,” says Crook. “Increased platform capacities to 600 pounds unrestricted and 750 pounds restricted were further customer-driven options.

“The 60-J boom project taught us that there are still multiple unsatisfied customer requirements despite manufacturers that have been in the market a long time. We are evaluating the opportunities for greatest customer benefit within the telescopic segment.”

Expect to see many of these opportunities arising during the coming years.