Bouygues and Cimolai for controversial bridge 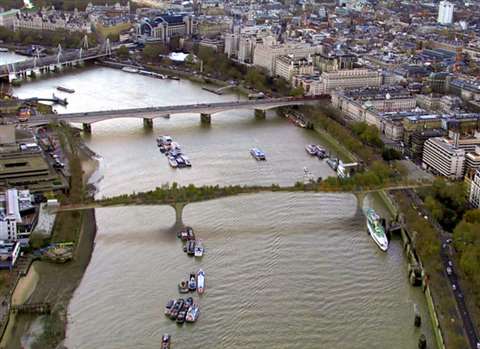 A joint venture of Bouygues Travaux Publics (TP) and Cimolai has signed a contract to construct a controversial bridge across the River Thames in London, UK.

The £175 million (€223.29 million) Garden Bridge has drawn criticism over its procurement processes, among other things.

The joint venture will be responsible for completing the detailed design, construction and planting of the bridge. It is intended to be a 366m footbridge across the river in central London, open from 6am to midnight every day, with footpaths through a garden which will feature plants, trees and shrubs that are indigenous to the UK.

Arup is leading the design team with Heatherwick Studio as lead designer, Dan Pearson as landscape designer, and Arup as engineers and technical specialists.

The president of the Royal Institute of British Architects (RIBA), Jane Duncan, has said that allegations relating to the procurement of the Garden Bridge were “extremely concerning”.

Last month she said, “Given the high profile nature of this project, the amount of public money at stake and the seriousness of the allegations, we would urge that the project is put on hold and the whole procurement process is then opened up to detailed scrutiny.

“This is by no means a comment on the work of the immensely talented Heatherwick Studio and Arup teams. Our concerns are about the fairness and transparency of the procurement process.”

The total of £60 million (€76.46 million) of public money has been allocated for the project, although the Chancellor of the Exchequer’s decision to fund the project has also met with criticism.

Bouygues TP and Cimolai have been working with the Garden Bridge Trust since April 2015 when they were appointed for preconstruction services, following a formal competitive procurement process.

The trust said the period of joint working had enabled the team to develop strong working relationships and to fine-tune and improve plans after local consultation.

It said that examples included making a 35% reduction in the number of road journeys by better use of the river for deliveries, and completing the construction of the bridge in 32 months.

Construction work on the bridge is planned to start this summer and to be completed in late 2018.

High winds cause scaffold collapse
High winds with gusts of up to 50 mph are said to have been the cause of a scaffolding collapse on Dec. 11 in Etna, PA
Latest News