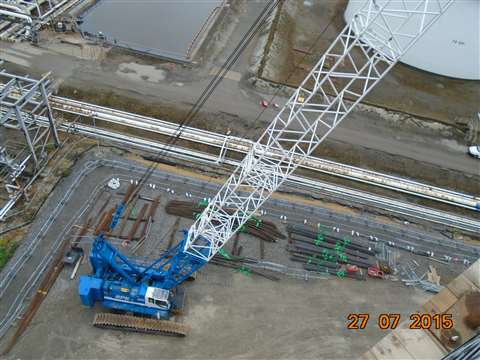 Kobelco Cranes Europe has sold a CKE 1350G lattice boom crawler crane to UK-based BPH Equipment. It was hired out for the construction of a large ethane tank in Teeside

The new crane lifts 135 tonnes at 4.5 metres radius. It was delivered to BPH, part of Balfour Beatty, at the Barton-on-Humber headquarters. After commissioning it was hired by Balfour Beatty for the construction of a large ethane tank in Teeside called Project Zeppelin. The crane was initially mobilised to site with a 61 m boom and later had a 24 m fly jib added.

Philip Chippindale, BPH general manager, said, “All our CKE 1350s have been extremely busy. For the last 18 months we have had a couple working on the Mersey Gateway Project for the Merseylink consortium. The others are working on a variety of interesting projects across the UK.”