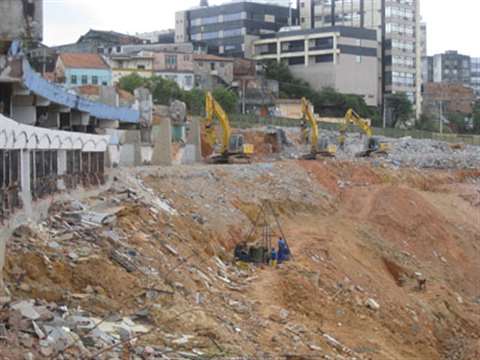 Brazilian contractor Arcoenge is using a number of Atlas Copco pulverisers to recycle reinforced concrete from the Fonte Nova Stadium in Salvador, Brazil

Brazil is currently seeing a wave of football stadium redevelopment and construction as the country prepares to host the 2014 World Cup. In addition to the refurbishment of existing stadiums, a further 12 stadia are being built from scratch, with the total bill for the redevelopment estimated as being €2.6 billion (US$3.4 billion).

Contractor Arcoenge, based in Butantã, has recently completed the demolition of the old Fonte Nova Stadium in Salvador, one of the venues that will host World Cup matches, over a four month period. The company used Atlas Copco pulverisers (BP 2900, DP 2800 and DP 2000 models) mounted on 38 tonne excavators to carry out both primary and secondary demolition, processing up to 150 m3 (5,300 ft3) per day.

All the resulting concrete debris was the further processed by the pulverisers to fully separate the rebar from the concrete. The former was than collected for recycling, with the concrete being processed by on-site mobile crushers to produce appropriate material for use as landfill foundations or road fill.