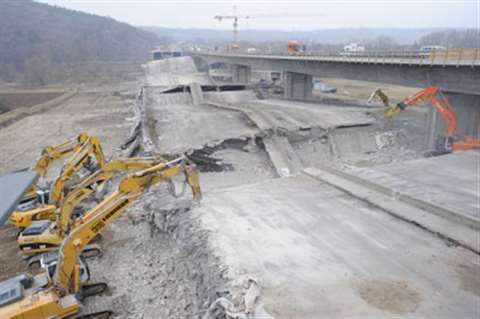 German contractor Messrs Rupert GmbH & Co Erdbau + Abbruch faced the challenge of clearing 25,000 tonnes of reinforced concrete following the explosive demolition of a road bridge over the river Main. This included 1,500 tonnes of concrete and an 800 tonne protective layer laid down on a road that runs under the bridge that had to be cleared in 48 hours.

The A3 autobahn runs from the Dutch/German border through the Ruhr, the Rhine/Main area and Bavaria down to the Austrian border and is one of Germany's busiest motorways. Currently, considerable upgrading work is being carried out at various locations along the route and at Randersacker, the road is being turned into a three lane highway from the existing two lane configuration.

As a result, a bridge built in 1964 over the Main had to be replaced with a new wider bridge, built alongside the existing structure, that is now open to traffic. The old 540 m (1,772 ft) long bridge was therefore blown down but the B13 road that runs underneath the bridge had to reopened as quickly as possible.

Rupert therefore deployed considerable resources to carry out the clearance work. This included excavators equipped with eight Atlas Copco medium and heavy breakers and six hydraulic pulverisers to process the debris resulting from the blowdown. One section of the bridge could not be imploded and to demolish this from below, Ruppert is using two Liebherr high reach excavators, a 954 and a 974, equipped with Atlas Copco CC2500 U and CC3300 U CombiCutters respectively.

The B13 was cleared and reopened to traffic after just 36 hours, and Rupert expects the clearance of the remaining reinforced concrete debris within four months. The company also plans to achieve a 100% recycling rate on the job, with all material being processed in its own recycling plant.