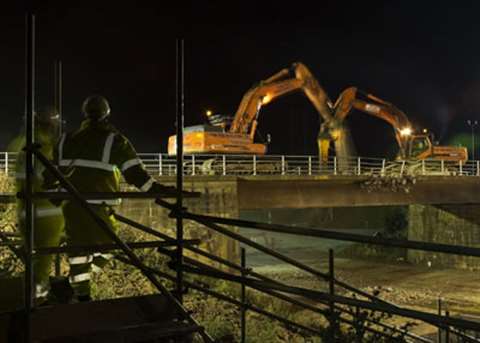 Tyne Tees Demolition, based in Newton Aycliffe, UK, recently started its contract to remove six bridges on a section of the A1 highway. Using a fleet of four Doosan excavators the company's first phase of the scheme involved the overnight removal of Leases Over Bridge. The bridge was 'removed' during a 18.5 hour road closure commencing at 18.00 hours on a Saturday night and finishing the following day at 12.30.

Following the laying of carriageway protection, a Doosan Solar 500 and DX340, both equipped with heavy-duty hydraulic breakers, were used to break-out the bridge deck prior to a shear equipped DX300 cutting free the exposed steel beams, ready for lifting by a 500 tonne capacity mobile crane. The fleet was then used to remove the remaining abutments.

The bridge removal scheme is part of a three year A1 upgrade project in North Yorkshire costing a total of £318 million (US$495 million).