Bringing down the Antelope 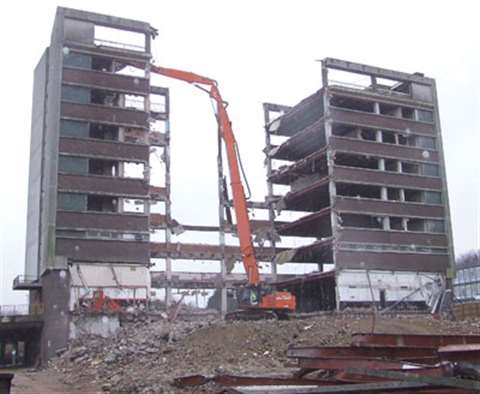 Southern Demolition used its Hitachi EX670 during the demolition of Antelope Park, Southampton

UK demolition contractor Southern Demolition Co Ltd is carrying out demolition work on a major urban regeneration project in Southampton. The three-phase demolition contract is part of a £25 million (US$49 million) redevelopment scheme to replace the 2 hectare Antelope Park, once described as “a run-down site exuding a forbidding ambience.” It will be replaced by a modern 16,000 m2 retail and leisure facility.

Souther Demolition reports that as a brownfield regeneration project, the development was subject to a New Deal for Communities programme to improve health and education, enhance ethe living environment and reduce crime and unemployment. As a result of this, the site was subject to regular visits from Environmental Health and Building Control. The site also posed other problems – live foul sewers and storm drains serving nearby residential buildings. In addition, the company had to keep a local access road open and minimise any possible disruption to local residences and businesses.

To carry out the high rise demolition work, Southern brought its Hitachi EX670 70 tonne excavator equipped with a 35 m (115 ft) high reach boom. This machine was supported by five other excavators, two 35 tonners and three 20 tonners.

A high degree of recycling was an integral part of the contract. As a result, a mobile crusher was brought on site to process around 10,000 m3 of material to Type 2 specification. Southern reports that in fact less than 3% of the demolition waste from the job went to landfill.