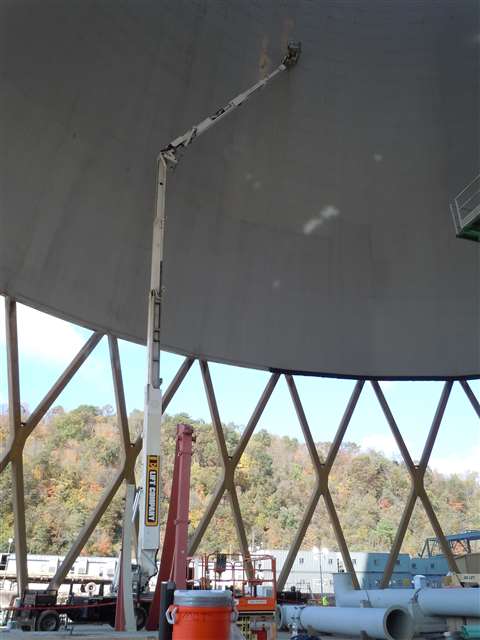 A Bronto Skylift at work in an Ohio power plant

The United Rentals branch in Marietta, OH had received an urgent call from a longtime customer: A big boom lift was needed.

Acme Lift sent its Bronto Skylift S236 HLA and Alex Gold, the company's Bronto operator who travels with the truck-mounted aerial work platform and stays with the machine when it's in operation.

The deadline was tight for the workers at the plant, who needed the Bronto to inspect and repair areas of coating at a height of 185 feet inside the cooling tower. But other work also was being conducted inside.

"Contractors also were putting some structures inside the tower that in the future will prohibit a unit like the Bronto from being in the tower once it's all retrofitted," Eddy said. "Everybody wanted the same real estate and the same time slot for their part of the project."

The crew using the Bronto completed its work in two days.

"I call these customers friends as well, and I guess the most satisfying part came when a guy looked at me and said, 'You came through again,' and that, to me, was enough," Eddy said. "I have to say to Alex: Well done. Those folks were tickled to death with his attitude and personality."

Besides its working height and outreach, the Bronto boasts 360-degree rotation and can stretch 53 feet below ground level. The Bronto's basket can hold up to 1,000 pounds. The Bronto, which can be operated at wind speeds up to 38 mph, is mounted on a 59-foot trailer.