US crane rental firm Bryson Crane employed two spreader beams, manufactured by UK company Modulift, below the hook of a Terex Explorer 5500 all-terrain crane to lift the first of seventeen 41 tonne (90,000 lb) prefabricated buildings into position at a communications tower in Edgewater, Florida. 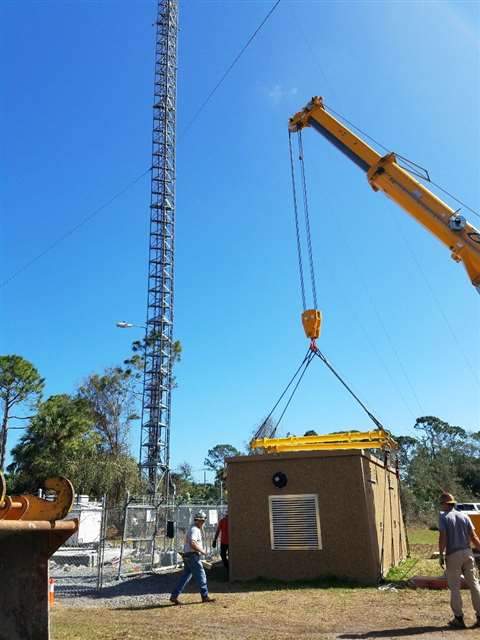 The 130 t capacity Terex Explorer 5500 lifts the first of the prefabricated communications buildings.

Bryson, of Florida’s Dayton Beach, accepted the scope of work from a local power company to relocate the communications buildings. The structures, which measure 12 ft x 20 ft x 10 ft and all weigh approximately the same, contain switches, breakers, and other equipment required to run the substation.

Scott Woodward, facilities manager at Modulift distributor I&I Sling Inc., from where the below the hook rig was sourced, explained that Bryson’s biggest challenge was presented by an offset centre of gravity, caused by backup batteries that are housed at one end. Four rolling blocks were mounted to the spreader beams to counter the offset in weight.

Ray Rutt, operations manager at Bryson, said, “By adding length to the rigging, we were able to ensure that each bottom sling that was connected to each pair of lifting points was equally tensioned by the wire rope moving over the roller. This particular rig configuration will commonly warrant the use of rolling blocks. We opted for a very compact rig to reduce the height and keep the spreader bars close to the load. This rig is more commonly used when there are four bottom lifting points [not eight as in this case] and the rig height is crucial. As there were a greater number of lifting points, the rolling blocks were a requirement.”

Rutt added that Bryson selected the spreader beam configuration versus a lifting frame because it already owned one MOD 50 and it made sense to acquire an additional unit. At the time of going to press, the 17 lifts are scheduled over the coming weeks.