Just as new technology is altering construction equipment, it is also changing the materials used in construction, with concrete no exception. For example, researchers at the University of Cambridge are using microencapsulation technologies developed by Dolomite Microfluidics to develop self-healing construction materials. 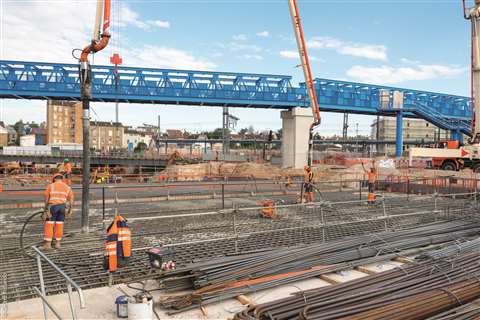 Work on the Grand Paris Express project in France

The University’s Department of Engineering’s Geotechnical and Environmental Research Group is developing microcapsules containing ‘healing’ agents – such as minerals, epoxy or polyurethane – which can be added to building materials to allow self-repair of small cracks which develop over time.

Dr Livia Ribeiro de Souza, a researcher in the group, explained, “Many composite building materials used in the construction industry – such as concrete – suffer fatigue over time, developing small cracks.

”We are hoping to overcome this problem by adding microcapsules filled with ‘healing’ agents to the concrete before it is used. The idea is that, as cracks begin to form, they rupture the microcapsules, releasing their payload and stabilising the material.”

When it comes to the equipment that uses the concrete, Stephen Bullock, COO, Power Curbers & Power Pavers, singled out stringless technology as a major development. “Stringless technology has been an exciting change for slipforming.  By using GPS/3D controls, contractors are now able to eliminate labour-intensive stringline settings which simplifies their work and reduces cost.

“Power Curbers & Power Pavers machinery is fully GPS-ready and our knowledge base grows practically monthly as we assist our customers as they move into stringless technology.”

Bullock also comments that, going back to concrete itself, in recent years there has been an improvement in water reducers that produce more compressive concrete strength and retarders which still allow for concrete workability. 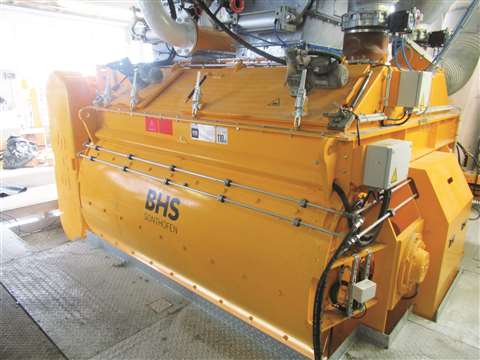 One of the other changes to concrete has been an increase in the use of pumpable concretes. “In order for concrete to be pumped, the slump must be very high,” said Rob Minnich, president, Minnich Manufacturing. “This introduces the need for more water and chemical additives to be added to the concrete. Even as concrete recipes changed, concrete vibration technology stayed the same until recently.

Not only is concrete being produced which can self-heal, but it is getting stronger. This is especially important when building in the Pacific Ring of Fire, a volcanic belt which rings the Pacific Ocean on three sides for a length of over 40,000km and which experiences frequent earthquakes.

Indonesia is one of the most severely affected countries in this region, which is where property developer, PT Modernland, a member of the Modernland Group, Indonesia, was building recently. The company has recently entered the field of precast concrete element manufacture and has made earthquake-proof construction a central aspect in the planning of its new precast concrete element premises.

A seismic test simulating three earthquake magnitudes was conducted on a test building. This revealed that, even in the case of an earthquake the strength of which only occurs every 2,500 years, the building showed only minor damage in the form of hair-line cracks and local spalling in the assembly gaps in the outer wall of the building. The positive test results mean that PT Modernland is one of the first companies in Indonesia to be authorised to construct multi-storey precast concrete element buildings with load-bearing walls. 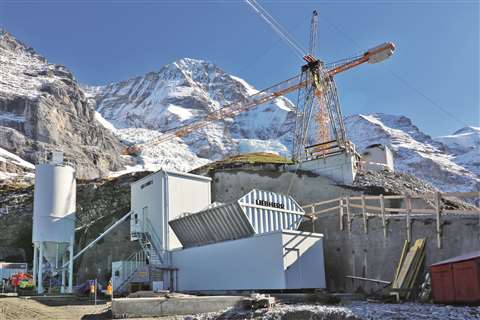 Liebherr’s Compactmix 1.0 is producing concrete at a height of 2,340m

The Liebherr Compactmix 1.0 is producing concrete at a height of 2,340m for one of the largest aerial cableway projects in European history. The Compactmix 1.0 is supplying the construction site for the V-cableway (V-Bahn) project in the Swiss mountains with concrete. The project was said to be a challenge regarding logistics and on-site operation.

The Grindelwald-Männlichen Gondola Cableway company and Jungfraubahn railway company are planning to build a V-cableway that will open up the Eiger Glacier and the Bernese Alps. From a joint terminal in Grindelwald-Grund, a tri-cable aerial cableway will lead to the Eiger Glacier and a ten-seater aerial gondola cableway to Männlichen. In order to implement the project, the project managers at ARGE V-Bahn Oberland were looking for a mixing plant with special properties that could be transported by cable car.

The compact design, system performance and pre-assembled, transport-optimised modules of the Compactmix 1.0 were said to be decisive factors for the decision-makers.

Since the aerial cableway was not ready for operation by the specified assembly date, the plant components were transported to the construction site by a 2-axle truck and a dump truck. The plant itself was then built on the Eiger Glacier at an altitude of 2,340m. For optimum mixing results, the plant is equipped with a ring-pan mixer with agitator system.

For concrete production at low temperatures, the plant is also fitted with a winterproof housing. The aggregates and cement are also delivered to the plant by aerial cableway and fed directly from the cable car into the series silo. The total project cost is CHF 470 million (US$466 million) and the opening is planned for the 2020/2021 winter season. 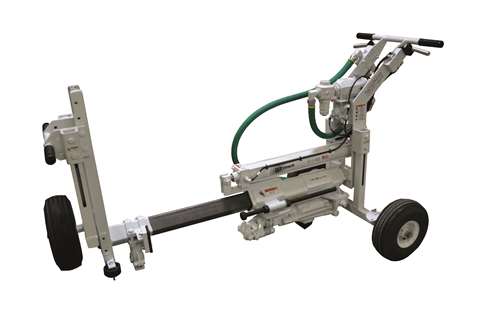 A project of an entirely different nature involving concrete took place in Ohio, US, when the operators of Summit Motorsports Park, home to the annual Summit Racing Equipment National Hot Rod Association (NHRA) Nationals, decided they wanted to give the track a new look to improve drainage, aesthetics and speed.

Miller Brothers Construction of Ohio, US, were tasked with completing the US$1.6 million quarter-mile (0.4km) track reconstruction with the help of Norwalk’s Smith Paving & Excavating, Inc. as a concrete subcontractor. Focusing on the staging area and track, the firm began pouring new concrete from guard wall to guard wall from the staging lines through 30m past the finish line, where the concrete would eventually meet new asphalt from that point to the sand trap at the end of the track.

For the track project a GOMACO paver with HV-2 internal paving vibrators from Minnich Manufacturing was used. During the reconstruction process, Smith Paving & Excavating Inc. used a GOMACO paver that required the use of 16 HV-2 Series vibrators.

“The HV-2 series vibrators are very consistent from unit to unit,” said Derek Dilger, vice president of Smith Paving & Excavating, Inc. “They give us consistent compaction throughout the pour, which is very important in a project like this.”

Another project taking place in the US involved the paving of concrete slabs in College Station, a town 150km from Houston, Texas, US. Wirtgen’s SP 62i inset slipform pavers were used for the project, which involved the building of more than 76,000m³ of road needed for the new Southern Pointe residential area, which will be built over an area of 2.6km² over the next 12 years. 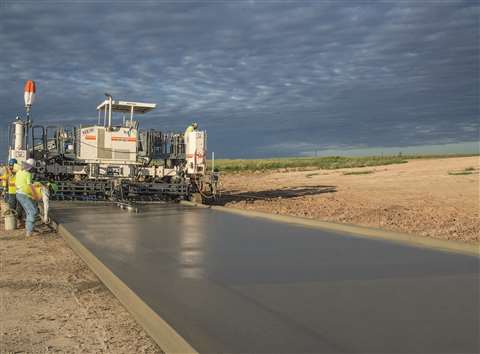 “We chose the SP 62i because we often work within the city limits,” said Mark Schinzler, operations manager at Larry Young Paving Inc. The compact 2-track paver from Wirtgen can be used for high-precision paving of concrete surfaces between 3.50m and 7.50m wide and up to 450mm thick – with special paving widths, thicknesses, and options available on request.

In College Station, construction activities began at the south entrance of the new residential area. The inset paver paved the concrete on a lime-stabilised sub-base over a length of 670m in two passes, 11.5m wide, 200mm thick, and with a crown of 3%. Wirtgen’s new SP 124i/SP 124 will be unveiled for the first time at Bauma 2019.

Unibéton, a French subsidiary of the HeidelbergCement Group, is producing specific ready-mix concrete for the Grand Paris Express project, the largest public transportation and infrastructure project in Europe.

To optimise the production process, the company replaced a planetary mixer with a twin-shaft mixer from BHS-Sonthofen. For the first time in France, the mixer was installed with frequency converters to enhance operations.

In Issy-les-Moulineaux in the suburban area of Paris, Unibéton is using new concrete recipes which require longer mixing times.

In order to ensure reliable and homogenous mixtures batch per batch, the Unibéton management team replaced one planetary mixer with the more powerful DKXS 4.50 twin-shaft batch mixer from BHS-Sonthofen.

“The civil works companies in the Grand Paris Express project work with concrete recipes that feature a lot of binders, additives and plasticisers. Our technology delivers highly dynamic movement during the mixing processes and is a perfect long-term solution for these new concrete recipes,” said Alexandre Bernabé, technical engineer for the French market at BHS-Sonthofen.

The company invented the twin-shaft mixer over 130 years ago and has developed the technology. Unlike other mixing systems with circular motion, the twin-shaft batch mixer offers a three-dimensional mixing concept that results in an intensive exchange of materials. This happens in the turbulent overlap area of the two mixing circles.

This way, it is said that the twin-shaft batch mixer rapidly produces mixtures with consistently high levels of homogeneity. In the case of ready-mix concrete, cements and admixtures undergo optimal integration.