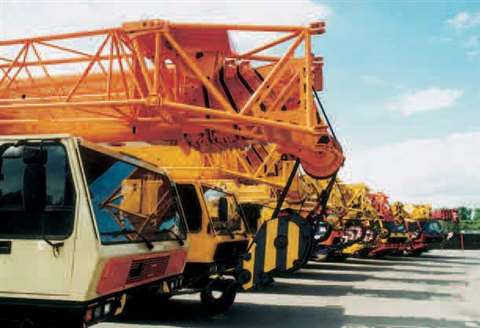 A selection of used cranes at Grove's Breda facility in the Netherlands. Like other manufacturers, Grove has made buying a used crane as easy and safe as buying a new one

Business in used cranes, particularly wheeled mobile and all terrain models, has increased in recent years because of the high resale value of this type of crane. Manufacturers have developed their used sales operations into almost standalone businesses and used dealers have become slick international operations.

Close to 70 % of sales of new Liebherr mobile cranes in Spain involve a part exchange, sales director Tobias Bohler says, so the focus at Liebherr in Spain is for used mobile cranes to be exported and replaced by new units. India is the best market for used mobile cranes at the moment, explains Bohler. A recent sale of 6 units included a pair of 160 tonners, a 125 tonner and a 1988 LTM 1125. The newest crane in the order was from 1993, which is typical, Bohler says.

South America is also a ready market, Bohler explains, where the company sold 11 used mobiles cranes (up to 160 tonnes capacity) in the six months to March, including to Argentina, Mexico and Venezuela.

Korea was also a good market before 1 January this year, which is when new exhaust emissions laws came into force similar to the US and European tier and stage systems.

In the UK, John Cantle, manager of the used sales division at Grove, believes that the market for used all terrain cranes has grown as a direct result of Japanese truck crane manufacturers ceasing to export truck cranes to Europe because of engine emission regulations. “People are looking at basic all terrains, manufactured from about 1994 onwards, as an alternative to truck cranes,” he says. Cantle also believes that the increased price and delivery times for new cranes are contributing to more and more crane users looking at pre-owned equipment as a viable option.

Grove's used crane sales operation has grown in recent years and Cantle says that one of the main reasons for this is, “People prefer to go straight to a manufacturer because they can trust them more and they can get the service, parts and checks on a crane that dealers don't offer. Also, they know that a manufacturer is not going to disappear overnight.”

Cantle says that, in effect, buying a used crane is becoming almost exactly the same as buying a new one. Grove offers packages with varying degrees of presale checks and warranties. A financing package is also available, should a potential buyer request it. Should a customer in, for example, Australia, want to buy a used crane from Grove and that particular model is currently only in stock in the UK, the company will arrange shipping. “We have offices or dealers in more or less every country in the world and we all know which cranes the others have,” says Cantle, “Buyers have access to spare parts and servicing that dealers have to come through us to provide.”

He adds that at the time of going to press, 45 used all terrains had been sold by Grove this year.

Terex-Demag is also working in a more decentralised way. Regional sales offices and dealers are offering for sale the used cranes they get as trade-ins within their sales organisation. The company lists available used cranes on its website and will arrange the sale. Should a customer in, for example, Germany, want to buy a crane that is for sale in the UK, Terex will arrange the shipping and other necessities.

It is not just manufacturers that are flourishing in the used equipment market, dealers around the world have shed the image of dirty yards and machines in disrepair, and are operating internationally.

Borcherts Equipment Trading was founded in 1998 in the Netherlands and specialises in the sale and rental of crawler cranes, primarily Hitachi, ranging from 50 to 250 tonne capacity. All business is conducted from the head office in Lemmer, the Netherlands, whether it be the international buying and selling, or the rental, of equipment in stock.

Borcherts managing director Heiko Koop says that most “hot” leads (business with a known customer) result from having a good reputation in the marketplace and returning customers. “Cold” leads (new customers) are generated by advertising online and in magazines.

Koop says that at the moment “we have lots of leads coming out of the Middle East and FarEast. India seems to be booming. There is a large interest for crawler cranes in the 100 tonne range.” He adds that the majority of cranes sold there were manufactured in the 1990s. Before Borcherts delivers a crane it is serviced and inspected by independent inspection agency, Veritas.

German used equipment dealer KMS, which has recently moved to new premises, says it sold 146 used cranes in 2004 for a total of € 12 million (US$ 15 million). KMS director Hans Richter has noticed that the 10 new EU countries in particular are buying used cranes, with more than 1000 being sold from Germany as a whole in 2004.

The issue of manufacturers granting licences to companies to supply spare parts and to service cranes has become more important in recent years, says Richter. Cranes that can be serviced near to their new owners as a result of a licence being granted, he says, are naturally easier to sell than those that cannot.

Used crane dealers are also becoming the first port of call for rental companies that have been turned down for financing by banks and manufacturers. Richter says that crane manufacturers and finance houses are “paying more attention than ever to the criteria of the European Basel II Convention, so crane hirers, who are established in the market have far better prospects [of receiving finance].” Companies that have been refused finance for whatever reason may, therefore, find that buying used cranes is the better available option.

Buying a crane from a rental company is another option. James Ainscough manages the used crane sales operations at Ainscough, the UK's largest crane rental house, “We sell cranes from our rental fleet that have got to a certain age or do not fit our fleet profile, like when we have bought a company and sell off some of the surplus machines,” Ainscough explains.

Ainscough says that the main selling points on Ainscough used cranes are the provision of a complete service and working history, including details of every job and, if applicable, any accident that the crane has been involved in. He says that dealers are not always able to provide this. The Ainscough brand name is another selling point, “We over-service our cranes rather than under-service them and people recognise that. We have made a name for ourselves and people realise that our cranes are well looked after.”

An interesting question is posed by the situation of a rental company selling its cranes - is it endangering itself by creating competition for itself? “We try to get them out of the [UK] market so that they don't rent against us in the future,” Ainscough says, “About 70 % of our used sales are exported, mainly to dealers and end users in the Middle East.” Domestic end users and smaller rental companies, however, do buy used cranes from the company and Ainscough says, “We have lots of repeat orders, people will even want cranes from certain depots or on the recommendation of an operator.”

Cranes that Ainscough sells are usually around 10 years old, although, according to James Ainscough, there is currently huge demand in the Middle East for cranes built in the 1980s.