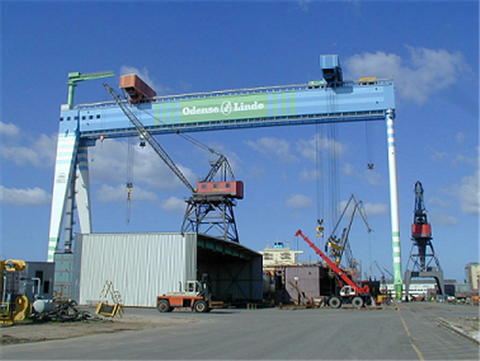 According to Casar, the goliath crane has a carrying capacity of 1,000 tonnes, a span between the legs of 148 metres, and a lifting height of 114 m. The crane has four trolleys with six hoists for precise positioning of large objects, for example, ship sections. Multiple objects can be lifted at the same time or suspended objects can be rotated.

Each hoist can lift 300 tonnes. Casar said the crane’s method of operation, with multi-layer spooled lifting gears (some of which work with spreaders), imposes high demands on the production tolerances of its ropes.

As such, compared to the original goliath crane’s rope (from 2001), wire with a higher nominal strength and, as a result, a higher minimum breaking force, was selected. In re-roping the crane, Casar said its Turboplast was well suited to the job as it has a standard tolerance on diameter of between +0 % to +4 %.

Casar warned that, especially with multi-layer wound drums, even slight deviations with regard to the tolerance constancy of the ropes can lead to tilting of the spreader and gaps in the spooling. With multi-layer spooling, faults and minor deviations can add up with each additional position and as a result, cause a greater negative impact.

Casar also said the length of the ropes must be precisely co-ordinated to prevent tilting. The supplied ropes have a Flemish eye with a solid thimble while the other end is clamped. A Flemish eye is a spliced rope loop which is also secured with a steel ferrule. Such an end connection attains a high level of effectiveness and can withstand temperatures up to 400 °C. The length of the rope is defined from the end of the rope to the centre of the thimble bore.