As far as construction projects go, there are few conditions more challenging than working at high altitude in mountains. Add to that a tight work schedule and you have the challenge that Italian contractor SEVIS is currently facing.

The company has been commissioned to build a 120,000m3 reservoir in Pinzolo, 2,000m high in the Italian Alps – in just four months.

Funivie, the company that owns the ski area in Pinzolo, is spending €5 million on the reservoir to supply water to more than 50 artificial snow machines used in the area. The demand for artificial snow is increasing both because of growing demand for skiing and as a result of climate change. 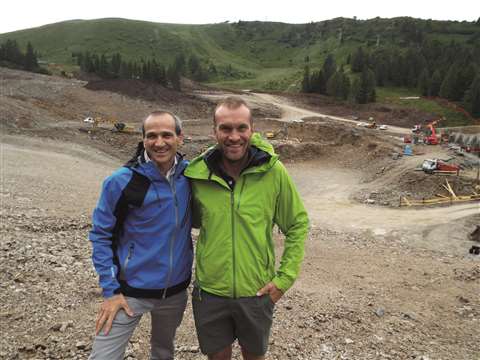 The delivery of the construction machines to the jobsite was a challenge in itself, says Giovanni Delladio, CEO of SEVIS and a member of the family that founded the business in 1952; “Since they were being driven 16km up the mountain along a tourist hiking trail, it had to be done at a specific time and under supervision.”

SEVIS is at least used to the mountains: it specialises in earthworks and engineering related to ski-slopes and resorts, and is based high up in Moena, 45km east of Bolzano in Northern Italy.

Playing a key role in the project is the rental division of CGT, Caterpillar’s Italian dealer. SEVIS has its own mixed fleet of 30 machines – comprising excavators up to 40 tonnes, wheeled and tracked loaders, dozers and dumpers, as well as some specialist Kaiser ‘Spider’ excavators – but uses rental when it has a special need, as in this case.

SEVIS has worked with CGT for 30 years, and frequently supplements its fleet with rented equipment. This flexibility enables it to undertake contracts such as the Pinzolo reservoir, but also helps because work is seasonal and so it prevents SEVIS having a large fleet sitting idle in winter.

In this instance, SEVIS is renting from CGT two Cat 352F excavators, 336F and 323F excavators, five 730C articulated trucks, a 963 tracked loader and a CS66B vibratory soil compactor. The contractor is also using its own Cat 336 Next Generation excavator on site.

The new reservoir is being created 2,000m high in the Italian Alps

A key feature of the project, beyond the challenges of accessibility and Alpine weather, has been the extent to which CGT has provided digital tools for its customer. In that sense the project is an exemplar of future rental contracts, where telematics and other digital technologies can help contractors work quickly and effectively.

At Pinzolo, this has meant using the inbuilt telematics systems as well as digital tools to help machine operators do their work.

The excavators are constructing the reservoir using Caterpillar’s AccuGrade 3D grade control system. A 3D digital model of the jobsite is uploaded to the machines and then shown to operators on their in-cab displays, helping them achieve the correct depths and grades. The system can be operated manually or used in an automatic mode where the machine’s hydraulic system automatically positions the blade.

This has been used not only for groundwork and excavations on the reservoir but also to build above-ground structures such as retaining walls. 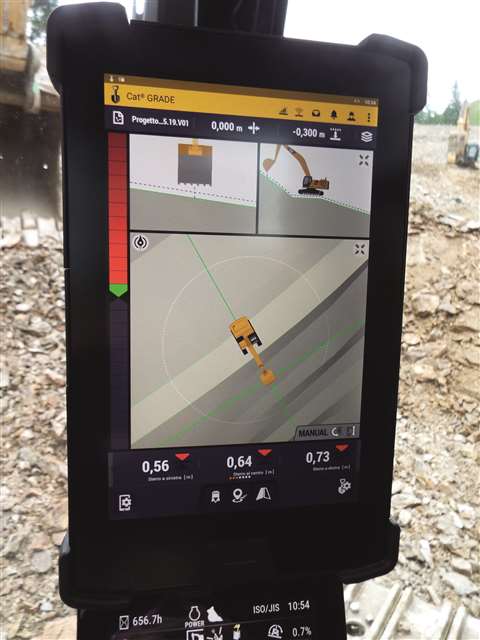 “The technology used has halved the time this project would have taken,” says Delladio. “Thanks to the digital technology, surveyors don’t have to be on site every day; they come just once a week to make sure the project is aligned with the plans.”

Giuseppe Cacopardo, CGT’s Rental and Used Equipment Manager, a 23-year veteran of the company, says CGT was an early adopter of these digital technologies, which means it has an experienced in-house team that can support its customers in the process of translating projects into 3D models.” He added, “It’s important not just to promote new technology but to also have the expertise to show how to use it.”

SEVIS has used AccuGrade on other projects, including work to prepare the slopes and infrastructure for the 2026 Winter Olympic Games in Cortina, and is able to create the 3D models itself, without backup from CGT. “SEVIS is one of CGT’s most skilled customers in this respect,” says Cacopardo.

Operators were initially reluctant to use the new technology, says Delladio, but they now prefer to work with it rather than without; “On some smaller projects, the technology isn’t necessary, yet operators ask for it,” says Delladio.

Preventive and predictive maintenance capabilities are also included in CGT’s services to SEVIS. The rental company has an ‘SOS lab’ for fluid analysis to asses if the equipment is at risk of failure. Remote monitoring of machine performance is made possible by the fact that the units have a condition monitoring system onboard. Analysis of the telematics data from those systems is augmented by a pool of thousands of hours of historical data from thousands of Caterpillar machines.

Cacopardo sees the adoption of digital technology as a major trend in the industry. At present, he suggests, the sector is midway to full acceptance; “As the younger generation comes in, they will be more receptive to new technology, so we can expect the acceptance of technology to boom.”

He adds that 3D technology is also becoming a more standard expectation; “Tenders are increasingly requiring 3D technology – for both public and private projects – due to the gains in productivity, safety, fuel economy and guaranteeing a better-quality finish.”

Indeed, the quality of finish on the Pinzolo reservoir is paramount since it is located in an area that is recognised by UNESCO as a World Heritage Site, so the finished product must be well integrated into the landscape. It also means that SEVIS is using machines that comply with Stage V emissions regulations.

The new digital technology is also helping to attract new talent. Recruiting operators is a challenge, according to Delladio, and as part of its recruitment efforts SEVIS has connected with some professional training schools to run apprenticeship schemes. Digital technology helps to make the job more appealing to young people. 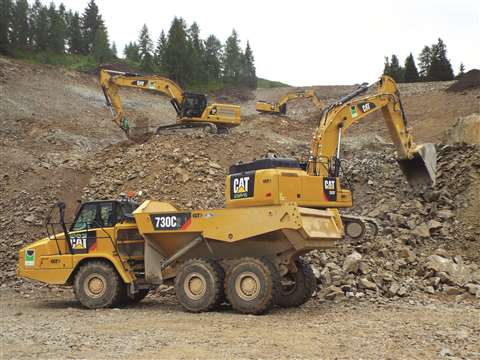 There are 27 operators working on this project, with an average age of about 35 years, and among them there are two apprentices on excavators and one learning how to be a surveyor.

CGT has also been offering more traditional services to its customer. “We have a fleet of 1,000 machines that includes 150 different models,” says Cacopardo, “And if CGT doesn’t have a particular machine it can source it from elsewhere.”

He says their response time is just four hours. Of its 25 branches, six are located in the Alps, within striking distance of SEVIS’s project.

That is important, because SEVIS does not have a moment to spare. The project – which was 75% complete in mid-August – must be finished while the weather is good and before the next ski season begins.

“There was a lot of snow when work started at the end of May,” says Delladio, “So hammers had to be used to break up the frozen ground, and it can sometimes start snowing again in September.” Such is the Alpine life.

Speaking with IRN, Giuseppe Cacopardo, CGT’s Rental and Used Manager, said the company is divided into two entities: CGT, which supplies machines above 10 tonnes, and CGT Edilizia, which provides equipment below 10 tonnes.

Cacopardo said, “For the rental of heavier machinery, CGT’s estimation is that the Italian market is experiencing a small growth of 1-2 %.” He did not comment on smaller machines.

CGT Edilizia is more focused on rental and has ambitions to grow its rental operations. One key area of opportunity for growth is in event rental, according to Cacopardo.