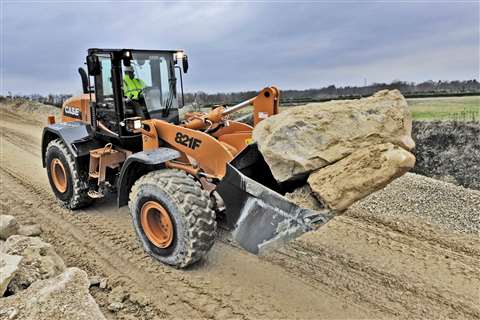 Case showcased its new F Series wheeled loader, the 821F, at the Samoter exhibition in March.

The company said 2011 marked the start of the launch of "an unprecedented range of new machinery and equipment" coming to the market over the next 24 months.

"The Samoter equipment exhibition in Verona provides the launch pad for an ambitious two-year programme of product renewal and machinery innovation at Case Construction Equipment," the company said.

Taking centre stage at the company's 1000m2 stand was a new F Series wheeled loader, the 821F. Boasting stronger, faster hydraulics and a Tier 4 Interim compliant 6,7 l engine, the machine is said to be more productive and fuel efficient than the E Series, yet faster and more agile at the same time.

A larger model, the 921F, was also demonstrated at a nearby quarry, and visitors to the show have been able to view the machine operating in site conditions. The 921F is powered by a 180 kW engine and operates with up to a 3,6 m3 bucket, taking Case into a new sector of the loader market.

Both the 821F and the 921F can be specified with standard Z-Bar loader arms or XR extra reach booms.

In addition to the wheeled loaders, Case has also broadened its compact range with the introduction new S Series skid steer loaders featuring a +25% larger cab than previous models. Two of the new loaders were on display at Samoter, the 39 kW SR150 and the larger 45 kW SR175.

The machines in the new range offer a choice of heavy digging radial boom arms and vertical lift arms for material handling operations.

At the show, Case also launched the first four models of its new C Series of crawler excavators. Powered by Tier 4 Interim compliant engines, the CX250C, CX300C, CX350C and CX370C models range from 132 kW to 189 kW and boast up to +5% faster cycle times than their B Series predecessors.

Lift capacity is increased by around +6%, and each machine has a slightly higher operating weight to cope with increased digging and lifting capacities. The CX250C now tips the scales at 24800 kg, the CX300C at 29500, and the two top machines at 34700 kg and 36800 kg respectively.

A full range of buckets and attachments is also available for the C Series models.

And Case also unveiled its new 695DT construction king tractor loader backhoe, top of its new range of T Series backhoes, at the exhibition. The machines are said to feature +20% increased loading capacity and have integrated hydraulic quick couplers to allow fast attachment changes from the cab.