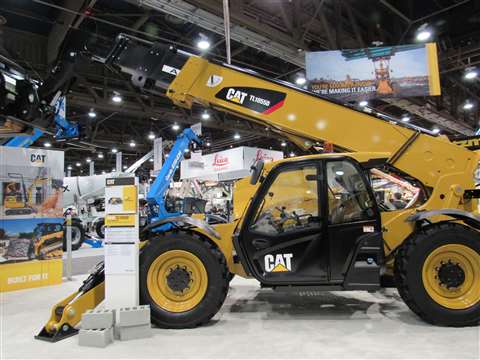 Caterpillar introduced the TL1055D at World of Concrete 2015.

Using World of Concrete 2015 as a launch pad, Caterpillar introduced its new TL1055D telehandler and also discussed its TL1255D.

The cabs now feature brand new dashes with optional LCD displays, and the joystick offers on-the-move driving control and improved simultaneous boom functions. The extend cylinder has been moved from the bottom to the top of the boom for better visibility, as well.

The units will ship in May.

Caterpillar also said customers should expect two new European-focused machines to enter the U.S. this year due to consistent growth in the telehandler market.

For a full review of the new telehandlers, see the March/April issue of Access, Lift & Handlers.