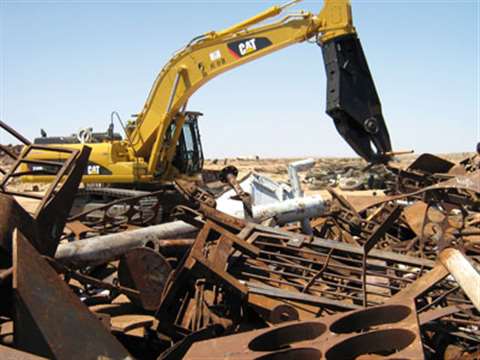 Cutting up the stockpiles of redundant equipment should result in some 250,000 tonnes of saleable scrap metal by the end of the project

First discovered by German prospectors during the early 1900s, major diamond finds along Namibia's Skeleton Coast in regions like Lüderitz subsequently led to the rise of thriving mining communities at the turn of the 20th century. Attracting fortune hunters from around the world, many of these centres later became ghost towns as deposits were exhausted and have now subsequently been reclaimed by the mountainous sand dunes of the Namib desert.
Until 1994, the largest player in this country was Consolidated Diamond Mines (CDM), which at the time was a wholly owned subsidiary of De Beers. That year, a new agreement was concluded with the Republic of Namibia, resulting in the formation of the Namdeb Diamond Corporation. The latter is jointly owned by the Namibian government and De Beers Centenary AG.
Given the high intrinsic value that diamonds hold, all Namdeb mining operations are governed by strict security protocols concerning how processed diamonds are transported to market. This means that all equipment going into any diamond mining area - whether it is a dozer, a pick-up truck or an excavator - never comes out again.
However, given the scale of Namdeb's operation (and CDM's before it), a large stockpile of redundant equipment has steadily gathered at the company's various mining sites. Recently, both for environmental and practical reasons, it took the decision to clear these waste dumps, with Cape Town, South Africa, based company SA Metal securing the contract to systematically recycle and process the materials on site prior to their release from these secured areas.
The task of cutting up these redundant machines and other materials is being undertaken by two Caterpillar 330DL hydraulic excavators fitted with boom mounted S340 shears, sold and supported by Barloworld Equipment Namibia, the local Caterpillar dealer. A Caterpillar Work Tools team flew out from the factory in Holland to help install the shears, as well as to provide training for SA Metal's operators.

According to SA Metal's Xavier Fazakerley, the contract, which commenced in July 2008, is open-ended and expected to be ongoing for around three years. During this period, SA Metal expects to commercially process around 250,000 tonnes of saleable material.
"This is one of the world's most corrosive regions and metal items don't last long in this environment," explained Mr Fazakerley. "This means that any metal items scrapped prior to the mid-1960s will have in most instances turned to dust long ago."
The largest sizeable scrap metal source is located at Namdeb's Uubvlei operation, situated some 10km north of the Orange River and stretching approximately 1km inland.
He continued: "This represents one of the world's largest scrap metal stockpiles, In fact, the scale of the operation is so big that the footprint of the site is clearly visible from space - a final resting place for worked out earthmoving machines, commercial vehicles and just about anything else no longer usable. During dumping operations, everything was mixed in together. This means we have to separate metal and non-metal materials in sourcing items such as copper, steel, lead and zinc. Currently we are processing around 5,000 tonnes per month."
At Uubvlei, SA Metal expects to process around 100,000 tonnes of steel, with the balance sourced from an estimated 15 satellite mines spread over a distance of some 110km up and down the coastline.