Cause of Bam garage collapse 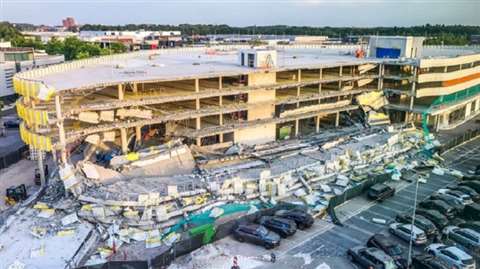 The results of an investigation into the technical cause for the partial collapse of an airport parking garage being built by Dutch-based Bam have been released.

The parking garage was constructed using BubbleDeck floors, which consist of precast concrete floor slabs and contain weight-saving plastic bubbles. After being installed on site, they were topped with concrete.

The investigation has shown the shear strength of the interface between the precast concrete floor slabs was insufficient to convey the traction, causing the structural capacity of the floor to be compromised.

High ambient temperatures on the day of the collapse were also considered to be a contributing factor.

The assumptions for the design and calculation of concrete structures are described in the construction standard NEN-EN 1992-1-1.

In addition to the investigation, it has been found that both structural engineers and building inspectors generally do not adequately recognise the importance of shear strength for the adhesion of the floor in the application of precast concrete floor slabs.

It has been suggested that an additional guidance of the NEN-EN 1992-1-1 would promote the application of the standard.

Bam has shared the conclusions of the research with Eindhoven Airport and the Dutch Safety Board (Onderzoeksraad voor Veiligheid), as well as with the wider construction industry.

All parties involved in the project will now discuss what will happen with the building and determine who can be held responsible for the incident.

Jaap Hazeleger, director of Bam Bouw en Techniek, said, “Fortunately, an event like this is highly exceptional. We are very grateful that no personal accidents have occurred. With the investigation results in hand, we will engage in further talks with Eindhoven Airport to determine the most appropriate follow-up steps.”