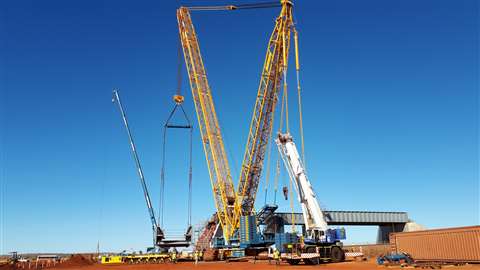 NRW contracting commissioned Sarens to perform the crucial lift of rail bridge girders over operating railway track for Fortescue Metals Group’s Eliwana Project in the Pilbara, Western Australia. The entire operation of transporting two girders from the laydown area to the lifting location and installation had to be completed during the rail shut down window of an 8 hours access window.

The crane was imported and mobilised to the site in 3 weeks and assembled in 5 days. The other equipment used during the project were:

Two girders weighing up to 155T, were transported from the laydown area to the lifting position and lifted at a radius of up to 42m. The entire operation was safely completed by a crew of 8 members. According to Project Manager, Minhaj Rizvi, “The rail shutdown window of 8 hours was a challenge. Our team worked with meticulous planning and preparation and executed the lifts safely and efficiently within shutdown window with zero incidents.”