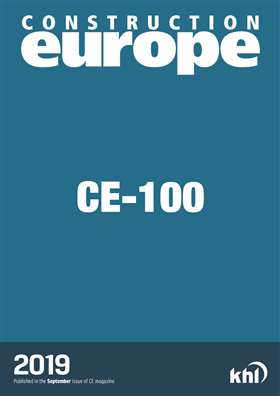 As is usual, the league table has witnessed a few changes in company rankings this year, but, unlike last year, when the top ten companies remained in the same position, there has also been some movement in the companies ranked from seven through to ten.

The UK’s highest company in the table, TechnipFMC, has slipped to eight with Austrian-based Strabag moving into the former’s position, up one from last year. A notable change has been the drop in revenue for Spanish contractor Ferrovial. The company posted a revenue of €5.74 billion for 2018, less than half of the previous year’s €12.21 billion published in last year’s table. This dramatic fall in revenue is the result of excluding the firm’s service division revenue, which is classified for sale, knocking the company out of the top ten – nine places lower than it was in the 2018 table, in fact, to 18th place.

Vinci has remained number one since the CE-100 league table was first published 18 years ago, and yet again the French contractor maintains its position at the top. In its full-year 2018 financial results, Vinci reported growth in revenue from both its French and international activities.