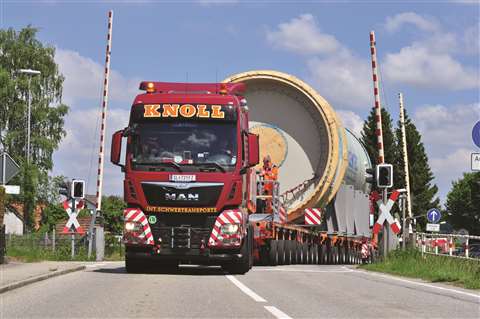 All up it weighed 322 tonnes

Knoll Transporte’s job was to transport an oversize and overweight load in the form of a new cement mill tube from the manufacturer in Austria to a works just over the border in Germany.

The CEMTEC cement and mining technology company in Enns, Austria, made the mill tube and it was delivered by Knoll to the Rohrdorfer Zementwerken in Germany. When installed at the cement works the job of the mill tube is to crush the coarse cement and prepare it for further processing. Knoll is already known for carrying out many spectacular operations in high alpine areas but this transport presented new challenges for the whole team.

The drum had impressive dimensions of 17.40 metres long, 5.25 m wide, and a height of 5.45 m. It weighed 167 tonnes. Load dimensions and stability meant that it was only possible to operate using modular axle lines. Knoll decided to find an interesting combination consisting of equipment from German manufacturers Scheuerle and Goldhofer. There were 13 axle lines of THP SL from Goldhofer and 8 axle lines of K25 from Scheuerle. 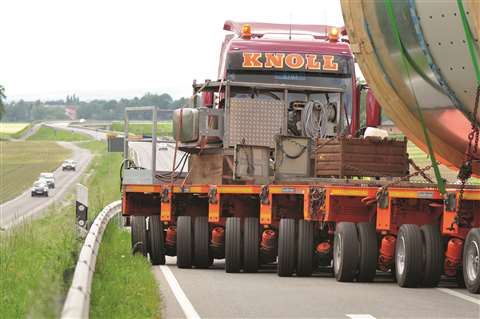 Making full use of the width of the road

Two new MAN 41.640 8x4/4 heavy haul tractors were used to pull and push. In this configuration, the total combination was 55 m long, 5.25 m wide and 6.75 m high, with a total weight of 322 tonnes. The preliminary stage for this transport was 14 months, during which time many discussions had to be conducted with road traffic and approval authorities as well as the police, the German railway and energy supply companies.

The height of just under 7 m meant a motorway journey was not possible. In calendar week 21, after all documents and approvals were available, “the final day” arrived. The largest transport to date in Knoll’s 85 year history began.

At the manufacturer the component was loaded, from where it went 7 km into the Ennshafen harbour to the roll-on roll-off ramp, where a pontoon already stood ready. The loading on the pontoon proceeded without problems, followed by the pontoon on the Enns and Danube in the direction of Passau to the RO-RO ramp there. That night an inspection in the port of Passau meant a quiet night for the transport crew. On 25 May 2017 the transport crew waited at around 05:00 hours for the departure.

After consultation with the police, drivers and companions, the approximatel 250 km long trip to Rohrdorf began. For comparison: The direct route from Passau to Rohrdorf is around 160 km and can be comfotably driven. This transport, on the other hand, could only be driven along federal and circular roads because of its height and the weight. In some cases, roadways were also used to bypass overhead power lines. 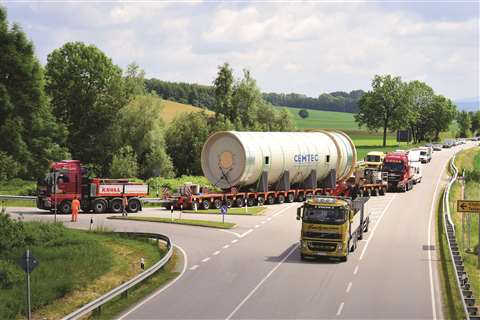 Along the route there were several bottlenecks where the towing vehicles had to be relocated. This is usually done quickly with a pulled unit but the two 640 MAN tractors had a particularly strong fight with slopes of up to 14 percent. For these two other towing vehicles reinforced the convoy. An MAN 41.660 8x6/6 from the company JMS Risi from Switzerland, as well as a 3 axle Volvo with 500 hp from the company Saller were employed. They could quickly offer help in the event of problems.

Christian Lakota’s well-established transport assistance team was also on hand with “advice and action” and supported with a quick “vanguard” in the field of signboarding, the laying of boards and wood in the bottlenecks. Since everyone involved had done a good job in the run-up, the transports rolled smoothly towards their goal and every day they were able to make the promised deadline. After five sunny days, the transport arrived safely and without a scratch at a place near Rohrdorf.

In the evening of 29 May the A8 road was completely blocked so the transport could cross the highway and reach the works site without problems. The drum was unloaded the following day. To do this the trailer had to be rebuilt from 21 to 11 axles, before the drum could be deposited at its destination. After the successful handover a “load” had obviously been removed from the shoulders of all participants.