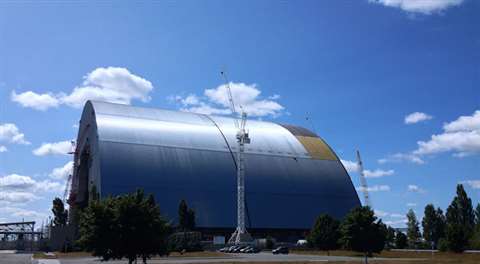 A major stage in the construction of a confinement shelter above the damaged nuclear reactor in Chernobyl has been reached.

The project, being undertaken by the Novarka consortium – which includes Vinci and Bouygues Construction – is to secure the site and prepare for the later dismantling of the reactor.

The two parts of the arch that make up the New Safe Confinement have been assembled. The operation involved aligning – down to the millimetre – 243 connections along the 260m width of the shelter, a giant structure made of steel and which is said to weigh five times as much as the Eiffel Tower at 30,000 tonnes.

Vince Novak, nuclear safety director at the EBRD (European Bank for Reconstruction and Development) which is helping to finance the project and manages the Chernobyl Shelter Fund, said, “This is another major step forward. The construction of the steel structure is nearing completion. We are confident that all work will be concluded by end-2017 as planned.”

The operation of bringing the two semi-arches together was completed within a day. Now, nearly 1,000 bolts have to be adjusted and tightened to seal the two halves together. International heavy lifting and transport specialist Mammoet was also involved.

The New Safe Confinement is being built to seal off reactor 4, which exposed in the 1986 nuclear accident in Chernobyl. At 110m high – taller than the Statue of Liberty and wider than the Stade de France – this structure is designed to protect the environment from radiation releases and provide the infrastructure to support the deconstruction of the shelter and nuclear waste management operations.

The next step will involve repositioning the entire structure over the damaged reactor’s sarcophagus. Remaining tasks include installing an innovative ventilation system to prevent the structure from eroding over its 100-year lifespan, constructing a technological building as the future control centre, and fitting the arch with fully automated cranes, tools for deconstruction and other auxiliary systems.