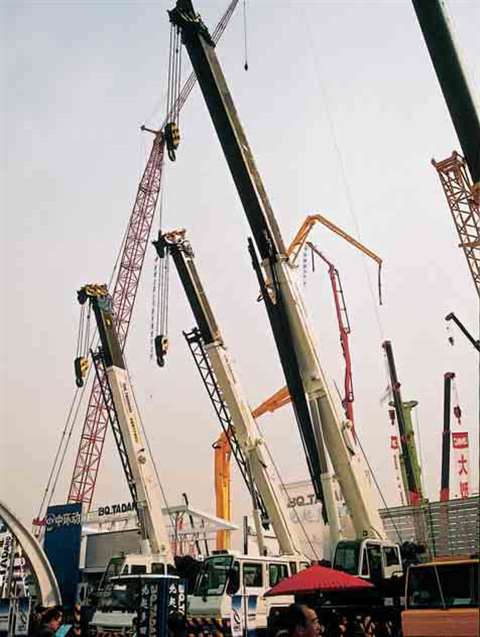 1 Tadano recently established a new production facility in the Shunyi district in Beijing. Full production started in August last year and the majority of mobile cranes on the Tadano stand at Bauma Ch

Bauma China hosted a wide range of international and domestic manufacturers. From the large Chinese manufacturers, including XCMG, Puyuan, Sany, Chang Jiang, Xugong and Fushun, to international operators that include Kobelco, Terex, Hitachi, Liebherr and Manitowoc, and suppliers, for example, Casar and Pfeifer, the exhibition provided a great snap-shot of the crane industry in China.

China's crane market is huge. Around 13000 mobile cranes were sold in China last year, and although the forecast for 2005 shows a decline to around 12000, the market is still in a very positive position. Another factor that will contribute to an overall reduction in sales of mobiles over the short-term is the high level of mobile cranes sold in the last two years, which now account for around 50 % of the total mobile crane population in China.

The crawler crane market in China is slightly different in that one of its main user groups is energy and petrochemical plants, which tend to be long-term projects. There is little doubt that the recent cooling measures will have some impact on the sector, but the market, according to a number of observers, currently stands somewhere between 250 and 300 units a year. Around two-thirds of these come from domestic producers.

On the subject of domestic production, many international names are looking to produce cranes in China – indeed many, for example, Liebherr and Potain already have plants in China. One of the most recent factory set-ups is the new BQ-Tadano facility, in the Shunyi district of Beijing. Full production started in August 2004 and the majority of mobile cranes on the Tadano stand at Bauma China were produced by BQ-Tadano.

In addition to crawler and mobile cranes, China also produces tower cranes. One of the major manufacturers is SYM, which is part of the Shenyang Group. The company recently introduced frequency control and fault detection systems as optional extras on many of its cranes.

According to SYM, the tower crane market in China has grown significantly over recent years, but the government's recent spending curbs have had an impact on the market and sales are now falling – probably temporarily. Estimates put China's tower crane market in 2003 at as many as 4000 units.

Other major producers of tower cranes in China include ICM, Beijing Manufacturing Company, and Quanxi Manufacturing.

Finally, on a more cautionary note, an official from Germany's machinery association, the VDMA, said there was still a very urgent need for legal security concerning investments in China and for the legal protection of know-how and design.