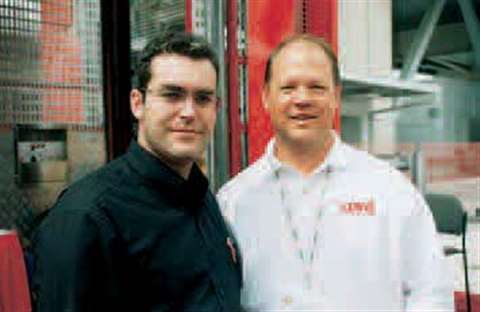 No doubt there will be many European and North American hoist manufacturers giving serious thought to low-cost production in China. It seems-as some visitors to the Conexpo exhibition will already have discovered-that a Canadian company, Ontario-based Avro Hoist Co, has been among the quickest to get started.

Avro's owner and president, Jason Leibeck, told Access International at Conexpo that the company has been dealing with a Chinese partner, GJJ, for two years. A joint venture business, Avro GJJ Products, produces Hercules-branded, heavy-duty construction hoists for Avro's own rental business and for other Avro customers in North America, including Lewis Equipment Co based in Dallas, Texas.

The main structures of the hoists are built in China-the joint venture has a capacity of 60 units/month, although Mr Leibeck says that could double by the end of the summer-and all feature frequency converter controlled drive systems as standard. The control panels and PLC systems are built in North America, and buyers have the option of choosing Chinese-built drives or German SEW drives, if they feel more comfortable with well-known components.

Avro's own rental business, Metro Hoisting & Erection, based in Toronto, uses the Chinese drive versions-they are “equally good”, says Mr Leibeck-and has 12 units in its fleet with an additional 14 to be delivered this year. Lewis Equipment, meanwhile, already has a mix of 40 2700 kg and 3200 kg hoists and is planning to add an additional 28 machines this year. The FC7000SLS shown at Conexpo-a 3200 kg, noncounterweighted, low-speed hoist-is one of four Hercules units bought by Perini, one of the largest contractors in the US.

Both Metro and Lewis Equipment are using the Chinese-built hoists to replace aging fleets of Alimak machines (in Metro's case) and Champion Hoists (Lewis). Mr Leibeck claims his Chinese units are 30% to 40% cheaper than machines from the big US or European suppliers, something that makes all the difference in setting rental rates and making a profit.

Mr Leibeck says that with sales already established in North America, Avro will now target the rest of the world. Avro aims to find a ‘badging’ partner in Europe, where the hoists will be sold under the Avro brand. Negotiations are already underway with a potential partner, says Mr Leibeck.

If Avro's move into Europe makes news, so too has the Bocker Group's acquisition of bankrupt Steinweg (see News this issue), a move ensuring the name Steinweg remains in the industry.

Equipment buyers are also watching closely for developments at recently re-branded Alimak Hek. In addition to the name change-Intervect now being a distant memory-the company is reorganising its Italian operation.

Petter Arvidson, Alimak Hek's president and CEO, told Access International at Conexpo that production of mast climbers will stop in the country during the first half of 2005. The Italian operation will be retained for sales and rental activities. Lighter-duty mast climbers previously produced in Italy will now be assembled in Middelbeers, the Netherlands, from components heavily outsourced to eastern Europe. Drive units will still be made by Alimak Hek, and Italy will remain the R&D center for light-duty mast climbers.

Product wise, the focus at Conexpo for Alimak Hek was the new Scando 650 hoist, which is a three-motor version of the Scando machine launched at Bauma last year. The extra motor boosts carrying capacity to 3.2 t (up from 2.4 t on the previous model), while the base cage grows in width from 3.8 m to 4.6 m, making it ideal for the North American market, where big machines are popular. The hoist speed on the 650 will be 60.0 m/min, but a high-speed version offering 96m/min will be available in Autumn this year.

If Conexpo had some surprises, then Smopyc in Zaragoza, Spain, was of note mainly because of the vast number of local suppliers manufacturing hoists or mast climbers, including well-established producers like Goian, Alba, Camac and Saltec.

We have reported already on Goian's ambitions to expand outside Spain and its new lightweight mast climber (see News, AI April-May). Also introducing equipment was Camac, which added a new, compact 500 kg capacity materials hoist designed for use in life shafts and other narrow openings. The EC-HA-500-120 has a 1,2 m by 0.85 m cage (which is smaller than the 1,6 m by 1,1 m standard model). The drive motor is also positioned vertically rather than horizontally to minimise hoist dimensions. The hoist has a climbing speed of 20 m/min.

This small materials hoist sector is proving a popular one in Spain. Other companies added small machines, including Goian (which will launch 500 kg and 1000 kg units later this year, to add to its existing 1500 kg machine) and Saltec, which showed a new 500 kg Torgar material hoist, also designed for use in cramped spaces. Just as important for Saltec, however, was a new 1500 kg capacity materials/passenger hoist, the T-1/CR/15. This model has frequency control as an option, a 1.5 m by 2.1 m cage, and a hoist speed of 24 m/min (compared to 37 m/min on the company's 1000 kg version.)

New Spanish mast climbers, meanwhile, seemed to focus on lighter duty units for renovation or refurbishment applications, typically in southern European markets. In addition to Goian's new GP30, Camac introduced the Camac 1500, which offers 1500 kg capacity Alba's manufacturing arm, Macrel, has added the 1000/1800 kg capacity PEC-80 mast climber to its range. The new twin or single mast climber is designed for renovation work.in twin-mast configuration (with a 20.2 m long platform) and 750 kg with a single mast and 7.1 m platform. The platforms can also incorporate 2 m extensions that are extended from within the platform.

Alba's manufacturing arm, Macrel, has meanwhile also added a light-duty mast climber to its PEC range. The PEC-80-first introduced late last year-is a single- or twin-masted unit with capacities of 1000 kg and 1800 kg and platform lengths of 5.4 m and 16.7 m. A key feature of this machine is a minimum stowed dimension of 1 m, which makes it possible to transport the drive unit with a small van.

All these new lightweight masts are testament to the widespread feeling among Spanish manufacturers that the future market for mast climbers, in Spain at least, lies in renovation rather than new-build projects. Their rental customers must be telling them something.