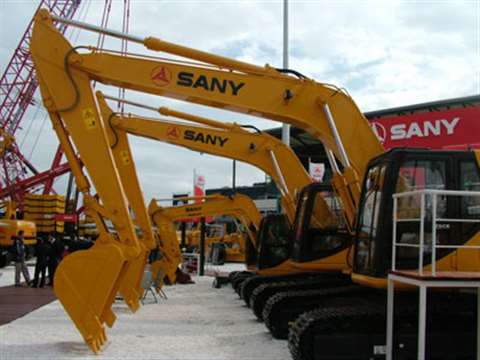 Construction equipment sales in China hit 173020 units in the first six months of the year - a +24% increase on the same period in 2007, according to the latest Chinese Market Report from Off-Highway Research. The economic consultant said growth in China continues at such a pace that sales in the first half of this year have already surpassed full-year sales for the whole of 2005.

The excavator segment stood out , with a +34% rise in sales to 40200 units sold in the first six months of the year. However, the steepest climb was seen in the mini excavator segment, with a +36% rise to 12200 machines retailed. There was also a big gain for mobile crane sales, where a +30% rise took the market to 12060 units.

Commenting on the continued boom in the market, Off-Highway Research said, "Although the government has begun to implement monetary controls against inflation, the on-going projects that started in the previous year have continued to stimulate demand for construction equipment, while the need for improving the supply of energy and raw materials further enhanced the requirement for earthmoving machines."

The company added that inflation, particularly the cost of steel, rubber and labour had seen manufacturers put up prices by +5% to +10% since the fourth quarter of 2007, with more increases expected later in the year to maintain profit margins.

Off-Highway research expects the pace of growth to slow a little in the second half of the year, but it is still expecting an impressive +20% year-on-year rise in equipment sales. This should see the market hit more than 303000 machines.

Off Highway research said, "This will make China the largest single market in the world, but it may also represent the peak of demand for the foreseeable future. The growth in the second half of the year is forecast to be moderate compared with the trend in the first six months, as actual investment growth has apparently slowed down, and the scale of new projects in the current year has been reduced."