Cliff side rescue for Vernazza Autogrù 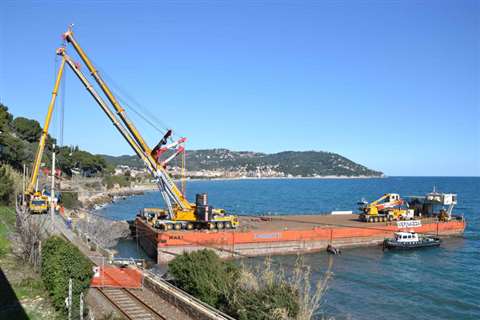 Italian lifting company Vernazza Autogrù helped recover an Intercity 660 train and its carriages after it derailed following a landslide near the cliffs of Capo Mimosa, on the south-western Ligurian coast in Italy.

The derailment was caused by a residential building, which slid down the cliff following the landslide, pushing the train off its tracks, a spokesperson said. No injuries were reported.

The incident happened on a stretch of rail track by the sea, with a vertical rock face on one side and water on the other. This made the task of putting the train back onto the tracks difficult.

Due to the location of the train, a crane barge was constructed. Diego Vernazza, an owner of Vernazza Autogrù, explained, “The idea was to build a crane barge - a self-submerging dock that could transport the cranes to a position close to the cliff. A module that could be outfitted in accordance with specific safety and stability requirements and supplemented by ballast compartments to maintain a constant balance during navigation and mooring was also constructed.”

Once complete, the fully equipped dock was 90 m long and 27 m wide, with an overall capacity of 11,700 tonnes.

“We had to reinforce the basic structure of the floating dock because, at first, the capacity of the module wasn’t sufficient enough to support the weight of the vehicles,” Vernazza said, “Once the barge was properly reinforced, we secured the Terex AC 700 to the floating dock to form an integral structure with the floating dock. This crane was the one that executed most of the heavy lifting required. After this was set up, we got the official Italian Marine Registry [Registro Italiano Navale] (RINA) certification that we needed for the navigation phase and for the subsequent lifting activities,” Vernazza added.

With the aid of a dive team, which surveyed an area of 5,000 square metres where the floating dock would be moored, and two tugboats, the barge was finally positioned close to the Capo Mimosa cliff. The train, which had been secured, was given attachment points to lift it back on the track.

“The risk was that the locomotive might become separated from the rest of the rail cars,” Vernazza said. “However, the locomotive and the first car behind it actually formed a single unit. During the derailment, the bumpers had penetrated deeply into the rail car, and the plates were solidly jammed together. After making several unsuccessful attempts with a thermal lance, we used multiple air-cushions, each with a thrust of 35 tonnes, to extract the locomotive from the rail car.”

To safely carry out the challenging lift, the AC 100/4 L was lifted from the barge onto the tracks, where lifted the train back into its correct position.