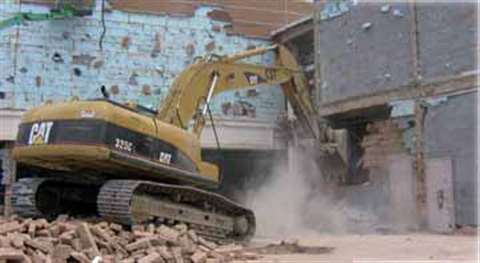 Prior to implosion, exterior masonry and the rear services concourse of the coliseum had to be removed

Opened in 1988 by Frank Sinatra and built at a cost of US$52 million, during its useful life the Charlotte Coliseum was home of the UNC–Charlotte 49er basketball team, the venue for the Atlantic Coast Conference basketball tournament and numerous other basketball related event as well as a venue for concerts by many of the leading musical acts of the 80s and 90s. It was the largest basketball arena built in the USA.

The Coliseum had a unique steel spatial truss system, as opposed to the more normal concrete frame construction, along with a single span roof system of around 375 ft (114.3 m) with no expansion joints. The roof was supported around the perimeter by A–frame columns, designed to pivot to allow movement, located in the plane of the exterior wall and carrying all lateral loads. The spatial truss itself aided in the demolition since shaped charges could be placed around the support system. The demolition itself was carried out in three distinct phases.

Phase one, which lasted two months, involved the demolition of the 22,000 ft2 wide elliptical arena floor and seating area. In addition, the rear service concourse and exterior masonry brisk had to be removed prior to the implosion on the 3rd of June.

Phase two was the preparation work required for the implosion, which took a week to complete. The job required 550 lb (250 kg) of explosive charges. Each shaped charge consisted of 13 lb (5.9 kg) of explosives, each wrapped in a reinforced box with layers of reinforcing chain and rubber belting. This was required to force the energy of the charge to cut the beam. The implosion began at the rear of the structure to minimise the shock wave and the entire implosion took just 13 seconds.

Phase three is the final clearance of the implosion debris and site grading, and this will be completed over the course of the next four months. At the height of the work, 10 excavators, six tracked loaders, seven skid steers, grapples, four 25 ft (7.6 m) personnel lifts, a fleet of haul trucks and a crew of 40 will be required.

Recycling is a key part of the job. Upon completion of the contract, CST expects to have recycled 70,000 tons of material, including masonry brick, concrete, ferrous and non–ferrous metals. The brick and concrete will be used as fill on site, with the metal sent to a recycling facility. In addition, 18,000 tons of asphalt will be recycled from the parking lots and used for the creation of The Loop, a three mile trail system in the park. In total CST expects to recycle more than 90% of the material on site

The open nature of the site also made for a perfect implosion in the public gaze, since clear and free views of the event were easy to find.