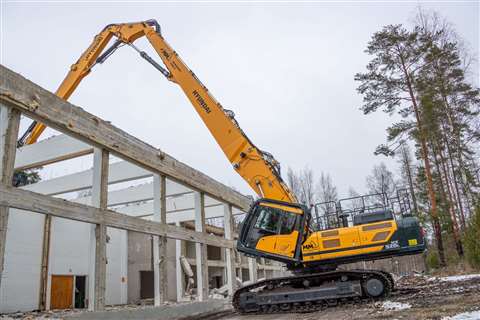 Demolition and construction contractor Maanrakennus Mykrä has used its new Hyundai HX520L excavator to demolish a college building in Finland.

The latest addition to the company’s growing Hyundai fleet, the 52 t machine is the largest piece of equipment operated by the company and is fitted with a customised 28 m (91 ft) boom.

The company used it to bring down the main building of the Kullaa College of Forestry – located in Ulvila on Finland’s west coast – as part of a redevelopment project that will see a new college building erected in the near future.

Juha Mykrä, CEO of sales at Maanrakennus Mykrä, said: “25 years after purchasing our first demolition machine, we have bought our first excavator with a high-reach demolition boom.”

Juha added: “Previously, we used an ordinary long-boom machine for high-work demolition, and we extended the machine’s reach by ‘piling up slopes’. This procedure is now a thing of the past thanks to the new Hyundai HX520L and its high-reaching demolition equipment. However, the design with its modular boom joint, makes it possible to swap to the traditional Hyundai boom onsite quickly – making it a very versatile machine.” 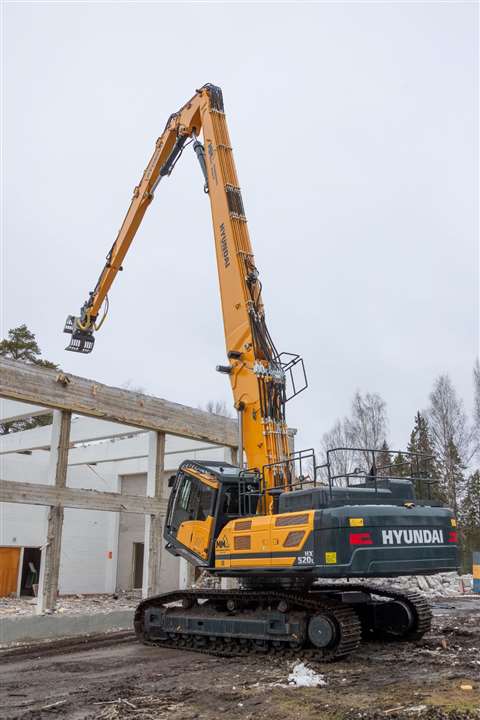 An 8-tonne counterweight was added to the rear of the machine, along with an extendable undercarriage for increased stability.

In addition to the high reach boom, Maanrakennus also had several other modifications made to the HX520L, including the installation of an on-board dust suppression system.

An 8 t counterweight was added to the rear of the machine, along with an extendable undercarriage for increased stability. The company also added Hyundai’s 360-degree Advanced Around View Monitoring safety system and the ‘tilting’ cabin modified with automatic air conditioning and a heated air seat, to provide added comfort for the operator.

Hyundai said the addition of the extra equipment, plus a Daemo DMR800 sorting grapple, raised the machine’s basic operating weight up to 65 t. The added extras and bespoke boom were supplied and installed by Kocurek Excavators, a specialist company based in the United Kingdom.