Concrete cutting – Removing a tunnel one step at a time

Experts at Fischer Weilheim developed a new, economical method for the removal of thick concrete tunnel lining in a tram tunnel in Stuttgart, Germany. 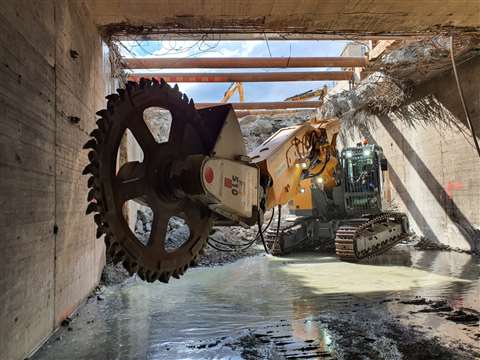 To begin with, the depth of roughly 1.6 m (5 ft) thick concrete walls was reduced by cutting strips by using a Kemroc rotary drum cutter. A Kemroc cutter wheel was then used to cut the wall into sections at these strips. Finally, the sections were pulled out, broken down and processed.

Stuttgart, the capital of the southern German State of Baden-Wurttemberg, is constantly changing its appearance.

As a part of the major railway construction project “Stuttgart 21”, numerous tunnels have to be excavated and several existing tunnels must be modified.This is the case in Schillerstrasse, where the passageway connecting the new “Staatsgalerie” tram stop and the Klettpassage (Hauptbahnhof stop) is being rebuilt.

Modifying the existing tunnel
This involves modifying a 120 m (393 ft) stretch of the existing tunnel. Work started in early summer 2020 when the general contractor, Ed Züblin, commissioned Fischer Weilheim to carry out the work using the normal method. 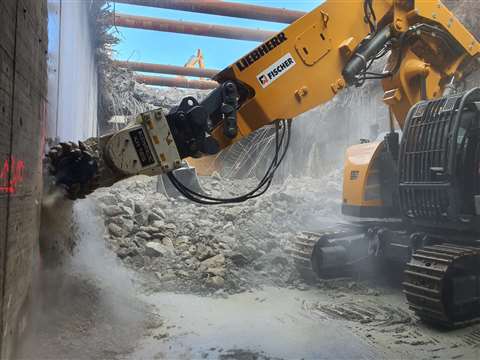 The initial phase was to gradually remove the crown of the tunnel and take out the lining at floor level while, at the same time, supporting the opening with the installation of ironwork. The demolition work proceeded by removing material from the top and the bottom of the tunnel, using a hydraulic excavator with breaker and shear cutter attachments. Work then progressed to the removal of the wall lining. This was made more difficult than usual due to the presence of a bituminous sealing layer and brick work between the concrete lining and the outer soil. According to requirements of the recycling industry, these materials should be separated and sorted before processing or recycling.

Demolishing the tunnel wall in segments
Using the standard demolition method with excavator and breaker, it was impossible to avoid the three layers becoming mixed together.

To prevent this from happening, the contractor Fischer and the Kemroc agent in Baden-Wurttemberg and Switzerland, Otmar Riester, developed an innovative method of demolishing the tunnel walls in segments.

Demolition work was carried out using a rental Liebherr R950 tunnel excavator as the main piece of equipment together with a breaker, a shear cutter and two Kemroc cutting attachments. With these tools, the walls could be divided into single 4 to 6 m (13 to 19 ft) wide sections which were then torn down and processed.

In the first step, the excavator operator picks up a Kemroc KR 165 rotary drum cutter and grinds a 150 cm (59 in) wide vertical slot into the concrete wall.

He thereby narrows the wall to a thickness of 100 cm, which is exactly the cutting depth of a Kemroc DMW 220_1000 cutter wheel. The operator then picks up that tool and cuts through the wall in the just before ground slot. 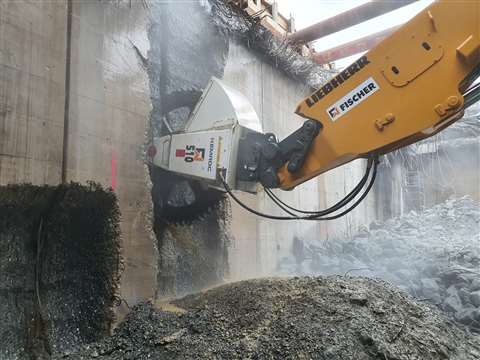 These two steps are then repeated for cutting horizontal slots dividing the tunnel lining into various segments. The next stage is to use a breaker to weaken the segment at the base of the wall before pulling it down using the excavator bucket.

The tunnel lining wall falls to the floor. In this position, each layer of soil, bituminous material and soil can be removed separately leaving a solid piece of concrete which can be broken down using breaker and shear cutter for removal from the job site.

Double the expected production rate
Two months after the job started in June 2020, almost half of the tunnel lining had been removed. Christoph Fischer, fourth generation partner at Fischer Weilheim, is responsible for equipment and special solutions in the family company.

He said: “After a short time, it was clear that this was the most effective and economical method for the demolition and separation of material in the tunnel lining.

“We doubled the expected production rate compared to the single use of hydraulic hammers since it isn’t so easy to get full productivity from an excavator with breaker in the confined space of a tunnel.”

According to Christoph, removing the tunnel lining in segments step by step was crucial to the increased productivity.

“Once each segment was torn down to the tunnel base, it was much easier to break them down using the hydraulic breaker. We could also use several construction machines at the same time. Of course, the machinery effort is very high but the saving in time was much more important on this construction site.

“In addition, this is a step forward in the demand for low emission demolition methods which are required so often these days.” 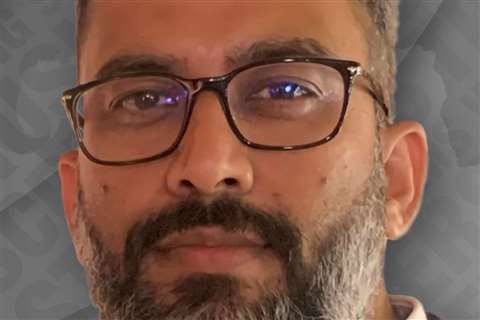