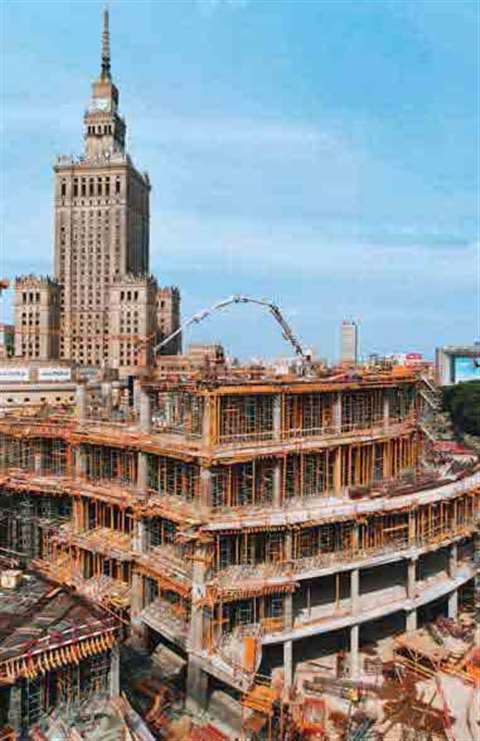 This year saw the introduction of two important pieces of legislation that will affect concrete construction in Europe. One is the Chromium VI Directive (2003/53/EC) and the other is the European Union's Emission Trading Scheme (see 'scheme calls for emission cuts’, p61).

The Chromium (VI) Directive (2003/53/EC) came into effect on 17 January and applies to cement, and products containing cement, marketed in the European Union (EU).

One of the most important consequences for the cement industry and its customers is the introduction of a limited storage period (shelf life) for treated cements. Delivery documents and cement bags will therefore carry a despatch/packaging date and shelf life as required by the legislation.

Many cements and cement-based products naturally contain soluble chromium (VI) trace metal as ‘chromate’. The Directive is designed to minimise chromate related allergic dermatitis (skin damage) arising from the unprotected use of cement. Chromium (VI) is only active in wet cement, and once hardened, concrete and mortars become and remain safe to touch, even in wet conditions.

Under the new Directive, companies must ensure their cements have levels of soluble chromium (VI) when water is added that are no more than two parts per million by mass of the dry cement. This means that small amounts of reducing agents will be added where necessary to control the quantity of soluble chromium (VI). As reducing agents are only active for a limited period, it will be necessary to declare a shelf life of 61 days for treated cement during which the very low level of chromium (VI) is maintained.

While the Emission Trading Scheme and the Chromium VI Directive will have an impact on construction techniques, advances in concrete technology - elasticity, strength etc - have made many buildings previously not thought possible a reality. In Warsaw, Poland, for example, ING Real Estate is developing the € 300 million Zlote Tarasy (Golden Terraces), a multi-functional building complex.

Many of the supporting components are made of high-strength, self-compacting concrete, with wall thickness of up to 1,5 m. The building's multifunctionality is mirrored in its exterior, which is being constructed as four separate zones, each with a different architectural aesthetic.

Skanska Sp. z.o.o. is the main contractor charged with delivering the project on time and to budget. While Skanska is constructing the whole of the complex's foundations, and Zone 1 and 2 using its own equipment, sub-contractor Hydrobudower 6 (HB6) is responsible for construction of Zone 3 and 4. Both Skanska and HB6 are using local contractors Bosta-Beton and Warbud S.A. for the concrete pumping and placing.

Both companies are using Putzmeister equipment during construction. Work on the 1,5 to 2,5 m thick floor slab, and the placing of concrete floors in Zones 1 and 2, for example, Bosta-Beton used two Putzmeister M 28 and M 42 truck pumps.

Warbud initially started work using mobile M 36 and M 42 truck-mounted concrete pumps. As the height of the building increased and delivery distances of more than 100 m were required, it switched to stationary concrete pumps and placement operations. In Zone 3 a Putzmeister BSA 1409 D and a mechanically slewable concrete boom formed one concreting unit, while in Zone 4 a BSA 2110 HP-D has been working with an MX 32 T stationary concrete boom.

The MX boom is situated on a 20 m high tubular column fed through small openings in the floor and supported by three floor frames. The floor frames fulfil two functions: they clamp the tubular column taut and they absorb the introduction of vertical load moments in the structure of the building.

With the help of a hydraulic climbing device, the height of the concrete boom can be adjusted as the building progresses. The climbing is quick and easy using two lift cylinders, which are connected to the MX concrete placing boom's hydraulic system.

The delivery line remains attached to the tubular column during the climb, with extra tubes added as needed. During the winter, for example, the two companies carry out pours using pre-heated aggregates and the concrete is pumped up to the 8th floor along a 200 m delivery pipe.

Immediately after the formwork is removed the cast wall is wrapped in insulating foil for at least 72 hours, this ensures the slow release of hydration heat. The result is high-strength building components and a smooth surface ready for painting.

Before the first load of concrete is delivered around 0,75 m3 of priming slurry is pumped through the line. As output pressure is never high (150 bar hydraulic pressure at a 40 m pump height, for example), the rod side of the machine is pressured.

The delivery line is emptied using a gate valve, which steers the concrete residue still in the line via a pipe bridge into a truck mixer. The valve is connected to the hydraulic circle of the concrete pump agitator and can be controlled by means of remote control push button.

As soon as the pipeline is empty, the whole of the concrete delivery system undergoes a thorough cleaning process and the BSA pump and gate valve are carefully serviced.

“Time is money”is a mantra many contractors will be familiar with. Therefore any advances in formwork cycle times and construction techniques in general are always welcome.

The first construction phase of the planned five main buildings of Volkswagen AG's Auto University at Hageberg in Wolfsburg, which covers over 18000 m2, is a good example of how formwork manufacturers and contractors can work together to improve productivity, keep down costs and bring a complex project in on time.

Wolff & Müller was awarded the construction contract, which had a very tight construction timetable. Just seven months (November 2004 to June 2005) was planned for the building's shell with a total of 25000 m2 of floor space.

The basic structure of the four-storey building resembles a folded ribbon featuring alternate closed and opened surfaces. The € 50 million building was designed by Professor Gunter Henn, and is scheduled for completion at the end of 2005.

Peri supplied the required formwork. Its SkyDeck with integrated drop head system was used primarily to ensure fast striking. Depending on the slab thickness and the concrete strength, the formwork can be struck after only one day, which meant material usage was accelerated and on-site material requirements were reduced.

Based on the intended construction sequence, over 6000 m2 of the lightweight aluminium slab formwork was ordered and kept on site. Re-shoring had to be carried out across all four floors as the pre-stressed flat slabs required support over a longer period of time.

With a focus on safety, efficiency and cost optimization MEVA's engineers support construction sites anywhere in the world.

According to a Wolff & Müller spokesman, Peri's engineers provided comprehensive formwork planning, which ensured optimal use of the system equipment and rational operational sequences. To meet architectural concrete requirements, they closely cooperated with the architect in developing appropriate slab underside plans. SkyDeck panels could therefore be used as design elements to the best effect.

“Extremely efficient logistical procedures with components in customised pallets ensured that the formwork process was even faster as orderliness was of key importance on the construction site and only a few crane lifts were necessary,”said the Wolff & Müller spokesman.

“In spite of the massive beams and complex edge areas, a complete storey could be finished in only four weeks,”he added.

Any advance in construction techniques and higher productivity must be matched by improved working practices. Advanced formwork equipment supplied by Doka UK, for example, is helping to maximise safety and minimise core construction times at what is set to become the tallest building in the city of Leeds in the north of England.

Contractors Bovis Lend Lease is using Doka's SKE 50 automatic climbing system and Framax formwork for the main residential tower core, plus the ground and basement floors. These measure a total of 105 m high.

According to Andrew Mair, managing director of Doka UK, “For this project Doka UK has developed a solution that enables the in-situ concrete operations to progress quickly and efficiently, with fewer interruptions due to inclement weather, less crane requirements, and the safest solution on the market.”

For the two other cores in the lower building, Doka is supplying the new guided climbing system (GCS) MF400 and Framax stripping corners.

With GCS the formwork and scaffold remain anchored to the structure even during repositioning, which means each platform is repositioned safely and easily in a single lift. According to Doka the system can also operate safely in winds of up to 70 km/hour, so there are fewer delays due to weather conditions.

The Framax stripping corners, which are also new product, reduce the time it takes to construct concrete shafts by eliminating the need to dismantle the formwork between each pour. A spindle mechanism, operated from the top of each corner, draws the corner in on itself, leaving a gap of about 60 mm between the formwork panels and the poured concrete. The entire shaft formwork, including the access platform, can then be lifted as a single unit.

Doka has also supplied trapezoid enclosure sheeting to provide a protected, safe working environment on the platforms for all three cores.

The main core has a 40-week construction schedule, while the two smaller ones are each scheduled to take 20 weeks to construct. The UK£ 80 million (€ 116 million) development is scheduled for completion in 2006.

Bauma 2022: Hinowa to display electric spider lift
Hinowa will also be exhibiting in a new stand this year
Loading...
Previous Next ×