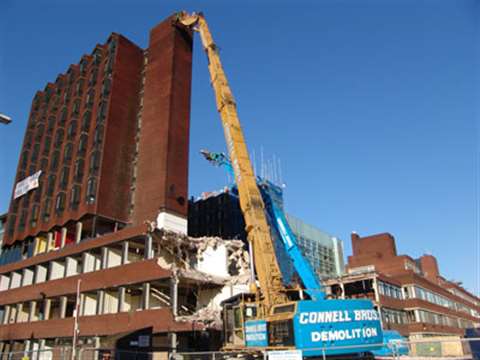 Two high reach excavators performed the primary demolition – a 120 tonne Cat with a 40 m reach and a 50 tonne ? with a 28 m reach

Loxford Tower is an 11 storey brick clad accommodation and teaching block adjacent to the Sandra Burslem Building, part of Manchester Metropolitan University, who is the client that engaged Connell to demolish it and the St Augustines Building in Manchester and part of the Alsager Campus in Crewe.

The building consisted of an U-shaped eight-storey accommodation tower sitting on top of a three storey square podium section that contains lecture theatres, studios and a refrectory. The main demolition work consisted of asbestos abatement, soft strip, the removal of an existing sub-station to the basement and removal of foundations.

Prior to primary demolition work, Connell Brothers carried out the asbestos removal and soft strip. Because of the close proximity of Loxford Tower to the Sandra Burslem building, full height scaffolding was erected to the east leg of the tower and part way along the north side. Propping to three floors below the working level was carried out. Demolition of the tower’s east leg was carried out using a floor by floor approach undertaken by two 3 tonne mini-excavators equipped with hydraulic breakers and crushers, and a skid steer loader that transported waste.

The remainder of the building was demolished using a combination of high reach and standard excavators. Two high reachs worked the site – a 120 tonne Cat 375L with a Cat 40 m (132 ft) boom and a 50 tonne Case 460 with a 28 m (92 ft) Kocurek boom – both equipped with hydraulic multi-shears. A standard 35 tonne machine worked alongside these, with other excavators brought on site as operations required.

The U shape of the tower provided an ideal drop zone and once a section of the podium structure was removed to allow for access, this was utilized for the soft strip removal. The drop zone also proved useful for the removal of the demolition debris from the floor-by-floor demolition of the east leg. Heavy duty steel barriers were placed across window openings and against the concrete columns to allow the skid steer to drop debris over the side of the building in total safety.

Connell, like most contractors operating today, always tries to maximise recycling on its projects, with recent projects it has carried out seeing recycling rates in excess of 90% of the total waste generated, and Loxford Tower was no different.

Light fittings were removed at an early stage and sent to a specialist recycling plant. Soft strip materials were segregated as far as possible – timber items, such as doorframes, were places in separate skips to allow them to be recycled. Light metal waste from suspended ceilings and other sources was also segregated, and copper pipes and other non-ferrous items removed and recycled wherever possible.

The main structure of the building is made up of reinforced concrete with a brick cladding, meaning that there is minimal structural steel to be salvaged. It was not possible to separate the brick cladding from the concrete and as a result, all suitable hard demolition waste had be crushed together to produce a single product. Most of the resulting waste was crushed on site, but at times when space was at a premium on the site, the waste was transported to Connell’s own waste processing facility, where it could also be crushed and recycled.

At the time of writing, the demolition work had reached below ground level, with Connell Brothers personnel working to remove the foundations of the tower.