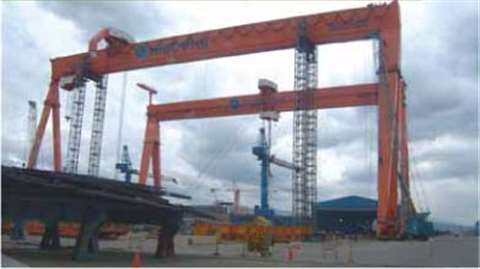 Gripper jacks remain a powerful force for heavy lifting, though some believe they are an option too often neglected. Phil Bishop reports

In the modern world of heavy lifting, it is strand jacks and hydraulic telescopic gantries, often in combination, that seem to be the preferred alternative to big cranes in most parts of the world. However, there is another long established solution that does not always get the consideration it deserves. That is the view of Bidlift, a UK company that offers the Kramo gripper jack system.

The Kramo climbing system was developed by Kramo Montage of Norway in the 1970s. The company went out of business in the late 1990s but the assets were acquired by Bidlift, a company established in 1990 by former Kramo UK boss Mike Dwyer.

The Kramo system uses a purpose- design tower system to support vertical steel bars. Gripper jacks, also known as climbing jacks or koala jacks, then climb the steel bar, koala bear style. By setting up one or two pairs of mast towers, a load bearing beam can be raised at each end by the gripper jacks. The load can either sit on the beam or, more likely, be slung from it.

Up to three jacks can be used on each mast and the jacks are 453 tonne (500 US ton) capacity each, giving a maximum four-mast system capacity of more than 5,400 tonnes.

While strand jacks later came to be used for lifting from their initial application in post-tensioning concrete, gripper jacks came to the lifting industry from concrete slipforming applications.

Bidlift offers strand jacking solutions as well as the Kramo system, and can advise clients which solution is the more appropriate for their application.

Bidlift engineer Rory Anderson says that the Kramo system has numerous advantages over other tower lifting systems. Firstly, all the lifting forces are transmitted through the vertical steel bar, 200 mm by 200 mm in cross section and in 6 m lengths joined together to the required height. This means that the tower system is only working to keep the square bars vertical. A clamping arrangement restrains the bars from buckling forces and allows the bars to slide vertical under compression. As the tower system does not bear the load, it does not have to be as heavy duty as a strand jack tower system.

Secondly, the masts of the Kramo system do not need to be assembled to full height at the outset. Lifting beams, jacks, and power packs are installed at ground level and, if required, the square bars and supporting masts can be built up as the load is raised. The lifting equipment can also all be tested at ground level.

Another benefit is that the lifting beam can be lowered using the climbing jacks, which does away with the need for such a high capacity crane for both assembly and disassembly. That said, some newer strand jack tower systems have been designed with certain self-erect features.

A feature of gripper jacks themselves is that the heavier the load, the better they grip. The Kramo jacks consist of an upper and lower assembly, with top and bottom blocks bolted to a hydraulic lift cylinder. Each head block has an up turned 'V' shape cut out which the square bar passes through. On either side of the square bar sits a wedge. As load is applied to the jacks the wedges are forced into the narrowing slot, compressing them into the bars. Should there be a hydraulic failure, the wedges are designed to mechanically engage, locking both top and bottom head blocks.

Each pair of wedges is operated by a hydraulic cylinder and linkage arrangement. With the Kramo design of climbing jack, both sets of wedges can never be open at the same time as they are mechanically interlocked. According to Bidlift, this fail safe system prevents human error losing the load.

An inherently negative feature of this type of jack is that every time the load is taken by a gripper, it is prone to slight settlement, which in precision lifting is unacceptable. The Kramo solution for this is a pair of load equalizing cylinders in the upper assembly. The cylinders are connected together with a tilt saddle and placed on top of the top block.

When two or more jacks are used together, the equalisers are piped together, allowing oil to flow between, evenly distributing the total load between the jacks, preventing any single jack being overloaded. By decreasing or increasing the stroke of the equalizers, very fine level adjustments can be made, ensuring that the lifting beam remains horizontal (or at whatever angle may be required). Pressure transducers fitted to the equalisers, rather than the main lift cylinders, give an accurate reading of the load on each jack. This level of control is unique to the Kramo jacking system, Anderson says, and makes it ideal for welding and setting gaps.

By comparison, says Anderson, the wires of strand jacks have a degree of elasticity and suspended loads can be susceptible to wind deflection.

A recent project for Bidlift saw it supply its equipment to Korean contractor World Industries Ace (WIA) to erect a pair of goliath gantry cranes at the newly constructed Hyundai Heavy Industries Company (HHIC) shipyard in the Philippines for client Han Jin. Each crane was 177 m long, 84 m high, and weighed about 3,400 tonnes.

For each crane, the lifting equipment comprised four newly designed modular masts, each with two 453-tonne capacity climbing jacks. Between each pair of masts two lifting beams were used.

For each installation, erection began by sitting the crane's 177 m main beam on three stools for assembly and fitting the upper trolley. It was then jacked up eight metres using the climbing jacks to allow the lower trolley to be added. The upper part of the legs, known as trouser leg sections, were then welded onto the main beam and then the legs themselves were hinged to the trouser sections.

The main beam was then raised to 84 m, with a crane used to tail the legs. Once the legs were at the correct angle, they were then welded to the trouser sections. The whole structure was then lowered slightly to weld the base of the legs to sill beams positioned on bogies.

With the gantry crane in place, the jacks and lifting beams were then lowered to the ground and the mast sections removed by mobile crane.

For the lift, each jack was connected to a single electrically-driven hydraulic power pack, each with a hydraulic quick release inlet and outlet coupling to supply the lift cylinders, equaliser cylinders and change-over cylinders.

The power packs can give a lifting speed of 16 metres per hour, supplying the jacks with 35 litres of oil per minute.

The job was run from a central control panel that displayed the level of the lifting beams, the position of the top and bottom wedges, power pack operation, jack operation and the load on each jack. From the control panel the operator could either operate jacks individually, in groups or all synchronised together, ensuring the crane remained level throughout the lift.

Video cameras fitted to the main lift beams, aimed at the jacks, transmitted images back to the control room to allow the jacks to be visually monitored without using personnel in aerial work platforms.

The first lift, completed early last year, was not without incident. The lifting beam was half way up its ascent when Bidlift received an email from Bygging-Uddemann, the Swedish company that had supplied it with head blocks. While the jacks had been overload tested on site and passed, Bygging had just discovered that the capacity of the head blocks was not what its steel supplier had led it to believe they would be. Everything came to a halt for a few weeks while the head blocks were changed out.

Mike Dwyer, Bidlift managing director, acknowledges that the Kramo system is not the best solution for every application. For lifting bridge deck sections, for example, or lifting above water, the Kramo system is inadequate. Strand jacks, which Bidlift also offers, are also more versatile. “You don't need a tower [for strand jacks]. You can hang them off anything,” he says. They can also be used for non-vertical lifts and even for lateral pulling.

But for raising a load straight up in the air from firm ground – vessel lifting, for example – Dwyer believes the Kramo system is “far superior” to using strand jacks.

Proponents of competing lifting systems can point out other shortcomings of the Kramo system, however. With a strand jack tower system, the whole structure can be tested before lifting begins, and not just the lifting mechanism. In December 1987 Kramo Montage saw its mast towers collapse at Shell's Stanlow refinery in Cheshire, UK. Dwyer says this was nothing to do with the lifting operation, which had not even begun, but was due to high winds and incorrect set-up of the masts by other parties. It is suggested that that failure persuaded some contractors not to use the system any more. Dwyer refutes this. “Most people gave us great support. The very next job we did was for Shell,” he says. He says there has never been a lifting accident with the Kramo system, nor has a jack ever failed.

The man who designed the Kramo system, Paul Andersson, later went on to design a variation, known as the RMS Push-Up system. While both use gripper jacks to lift in compression, with the RMS systems the jacks remain at ground level. After each one-metre stroke, the load is locked mechanically and another bar section is inserted from the bottom, with the effect that the whole structure is raised, one metre at a time. Maximum lift height is 150 m, and the lifting speed of up to 8 m per hour is broadly similar to the Kramo system, though slightly slower than strand jacks. The RMS system can be used with masts that lift 600, 1,200 or 2,000 tonnes per section, giving a maximum of 8,000 tonnes for a four-mast lift. The mast rig can also be moved horizontally in all directions by skidding.