Consolidation expected to rise in China 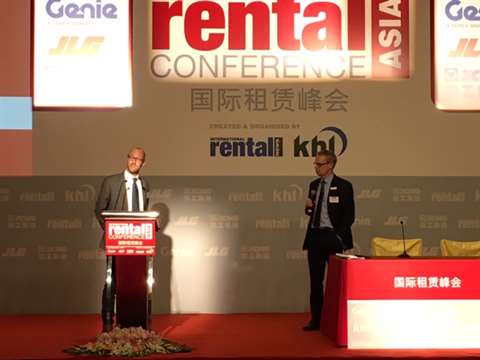 Jeff Eisenberg, principal consultant at Claremont Consulting, gave his view on the history of consolidation in mature aerial platform markets and the likelihood that we will see the same in China, at the International Rental Conference in Shanghai, on Monday.

Looking at the household saving rate in China of 47% of income, it tells the story of a cautious society that is debt adverse, compared to the likes of the US and Europe, said Mr Eisenberg, who has longstanding experience working in the MEWP industry.

Owners of those in the keep camp are likely to pay themselves after any debts and generally take less risks. Those companies preparing themselves for aquisition, on the other hand, are built to be desirable to a buyer, with some companies even talking to a potential buyer before they are set up.

”So, how do you value a rental company?” asks Eisenburg. EBITDA, the enterprise value of a company is one way, the other is profit, he said. Typically that is calculated as 10 x profit or 7 x EBITDA.

The rise of consolidation in the US started in the 1990s, exlained Mr Eisenberg, “It changed the landscape in the US and Europe.” US-based United Rentals is one of the world’s biggest consolidators, having bought 275 companies since its formation in 1997. Around 135 of these were in the first three years.

Talking generally, he added, ”You can borrow money from banks and become three times as big. The downside being that you have more units in your fleet, so greater depreciation, plus there is interest to pay on the loan, meaning you may not be profitable.”

Therefore, if you base the value of your company on 10 x profit, it is worth less than before, but if it is based on 7 x EBITDA, it is worth three times more. The ultimate outcome can depend on the market you are trading in.

“Do you really have the market do that?” asked Mr Eisenburg. Referring to a forecast in a previous presentation at the conference in which it was forecasted that China would have a million MEWPs in 10 years time, he added, “Well, if you think your market will grow to a million units, maybe you can.”

He concluded, ”Will there be a Chinese consolidator in the ranks of United Rentals? The answer, said Mr Eisenberg, is yes, “Once companies there get to a good size. Then it will be Chinese investors, not those from the US. And when it does happen, it will happen very quickly.”