Worldwide construction turnover grew by around 15% in 2017, almost reaching 2011 levels at a value of €116 billion (US$146 billion) according to data provided by the VDMA, the German machinery association. 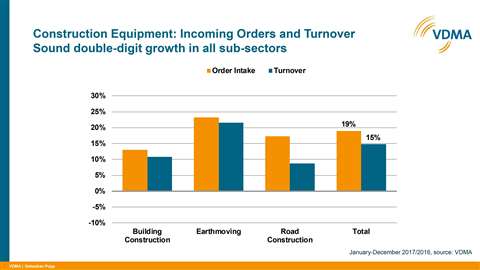 According to the data, North America saw a double digit sales upturn in construction machinery, and in South America manufacturers recorded a sales upturn of 26%. This was brought on by Chile, Peru and Argentina, with the latter being signaled out as a country with great potential.

The Near and Middle East was the only region in which the sector recorded negative growth, albeit with a considerable improvement during the second half of the year. The Indian market grew for the second year in a row, by 12%.

After five years of sometimes extreme downturns, the Chinese market exploded in 2017 (+86%) and is now the largest construction machinery market on Earth once again.

The news was also positive in Europe, with approximately 20% more construction machines sold in Europe last year than in 2016.

Construction equipment sales reached record levels in Northern and Western Europe, while demand in Southern and Central Europe rose considerably, albeit from a low starting point. Russia continues to cause the manufacturers concern. 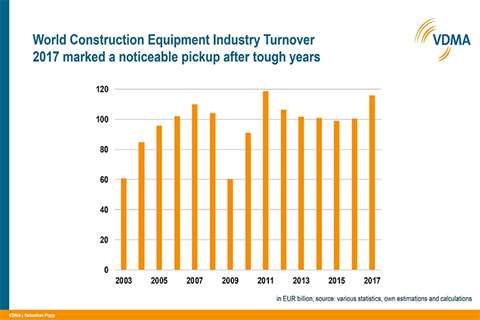 Germany led the growth in Europe, with its construction equipment industry ending 2017 with a turnover of €10.8 billion (US$13.4 billion) – an increase of 15% compared to the previous year. It is the fourth consecutive year of growth for the sector. Incoming orders were 19% higher by the end of the year.

In terms of equipment sales in Germany, the largest increase was in earth-moving equipment (+21%), followed by building equipment (+11%) and road construction machinery (+9%).