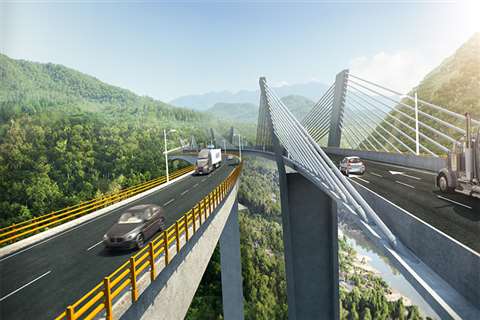 An artist’s impression of the finished bridge

A suspension bridge that was to shorten the travel distance between the Colombian capital Bogotá and Villavicencio has collapsed, resulting in the death of at least nine people.

The unfinished bridge is part of a government plan to boost economic development in the center of the country. The development calls for construction of a new road, including seven tunnels totaling 11.9km, 20 viaducts and bridges totaling 2.4km, and five footbridges. The project is part of Colombia’s 4G highway concessions program.

The collapse of the Bogotá to Villavicencio highway sent columns of concrete and steel into the narrow Ríonegro gorge. The planned 614m bridge was just 20m from being completed, according to Colombia’s Minister of Transport, Germán Cardona.

The distance between Bogotá and Villavicencio is 86km, but given the difficult terrain, travel can take up to three hours.

According to an eyewitness reports, at least 21 construction workers were on the bridge at the time one of two 258m high towers collapsed.