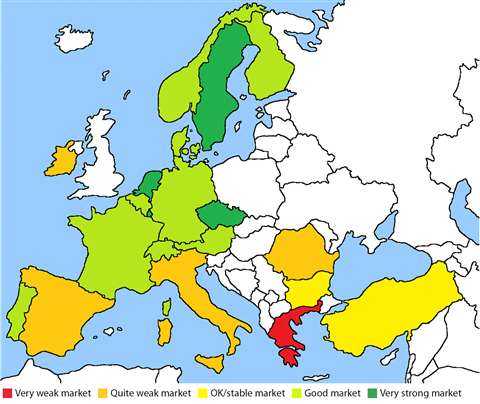 The latest sector review from EFCA (the European Federation of Engineering Consultancy Associations) has found that market conditions are stable or improving.

It said the most significant trend emerging from the 2017 autumn barometer survey was that it could identify a steady general improvement of the markets in European countries.

EFCA said that in general, the sector was reflecting the growth of European economies.

It said GDP (gross domestic product) growth in the Eurozone countries was slightly lower than for other European countries.

The market for engineering services was affected negatively by budget constraints from governments across Europe, as the public sector has reduced its investments. However, despite retraction in the public market, the order stocks of many consulting engineering companies are still growing thanks to increasing demand in the private sector.

The main challenges facing European consulting engineers were said to be low fees and lack of qualified staff. It added that political uncertainty was affecting the market, because some factors were not predictable. It said that this included uncertainty following the UK’s Brexit decision to leave the European Union, the self-proclaimed independence of Catalonia, geopolitical tensions and security threats in Europe.

As a result of 12 out of the 20 countries taking part seeing a rise, turnover is also increasing. The Barometer found that 11 out of 20 countries expected the total turnover of the consulting engineering industry in their country to increase. Profitability is improving, said EFCA.

The average EBITDA (earnings before interest, taxes, depreciation and amortization) ratio in Europe was 5.1% in 2016, it said, adding that profitability was expected to improve or remain stable in 2017 and 2018 in all countries except Greece (2017) and Belgium (2018).

There is an expectation that numbers of staff will increase in eight out of the 20 countries.

EFCA concluded that activity in the consulting engineering industry in Europe was stable and improving. It said the market was good or very good in 12 out of the 20 countries, with only Greece expected to face continued difficulties.

De Bie added, “The main challenges facing European consulting engineers are low fees and lack of qualified staff. Moreover, political uncertainty is affecting the market, because some factors are not predictable, such as the Brexit-related uncertainty, self-proclaimed independence of Catalonia, the geopolitical tensions and security threats in Europe.”

The Barometer Task Group of EFCA has been conducting surveys twice a year since 2012 to provide an overview of the consulting engineering sector in Europe, detailing developments for the latest six months and expected trends for the coming six months.