According to Liebherr, the electrically-operated environmentally friendly machines offer reduced noise and emissions and can transmit high volumes of data in real-time between the ERTGs and the terminal operating system. They have a safe working load of 40.6 tonnes and can handle six containers, with a one-over-five high stacking capability. The cranes feature Liebherr’s purpose-built Liduro heavy-duty crane drive system. LED lighting is used throughout which, together with other energy saving technology, reduces electricity consumption. Productivity and safety aids include DGPS, automatic gantry steering and anti-collision systems. The machines are also fitted with a diesel generator, enabling travel between stacks.

CFO of MGT Michael Fratianni commented, “This investment in energy efficient RTGs will significantly reduce carbon and nitrogen dioxide emissions. It is estimated that fuel consumption will drop by as much as 95 %. This equipment upgrade programme is the most recent in a series of initiatives intended to improve productivity, boost customer service, and expand capacity in an environmentally responsible fashion.” 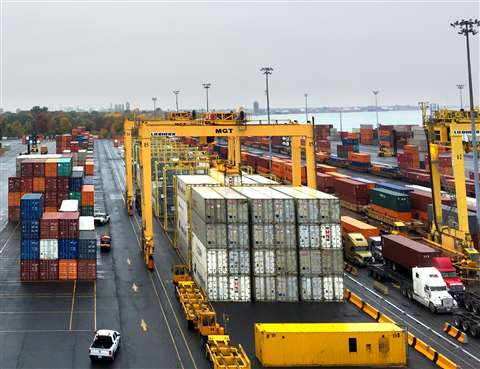 MGT bought its first crane from Liebherr back in 1997. Since then, prior to this latest order, it bought an additional four STS cranes and eight RTG cranes, plus a conductor bar system