The facility definitively ceased its activity in 2016, and the company Recifemetal España took charge of the dismantling project. 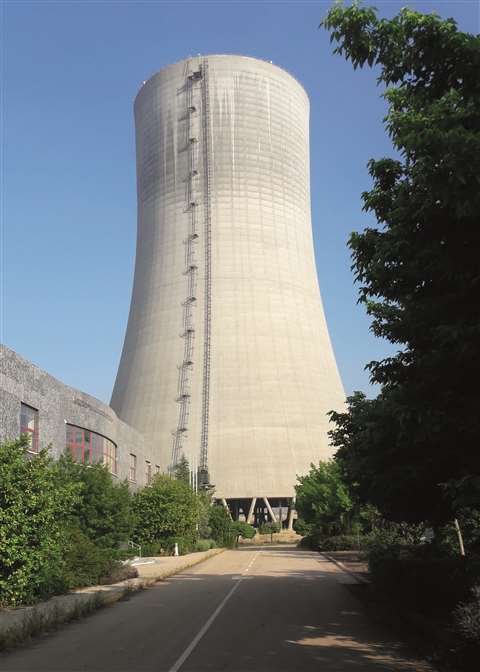 The demolition of the power plant’s concrete towers – the cooling and gasification towers – was one of the most complex tasks of the dismantling process, and Recifemetal España decided to demolish them by means of a controlled blasting. The design and execution of the blasting was awarded to Maxam due to its experience, gained by executing a total of more than 100 demolitions of this type.

Blasting demolition is a technique that consists in using small charges of explosive to break load bearing elements in critical points of a structure, resulting in its collapse. The explosive is confined in boreholes so the air overpressure caused by its detonation is minimal and does not cause any damage to the surroundings. This technique is usually applied to demolish high, thin buildings consisting of a structure made up of reinforced concrete beams and pillars.

The gasification tower was a rectangular prism with 22.4 x 10.2 m (73 x 33 ft) sides. Its highest point reached 81.2 m (266 ft). Its walls were made of reinforced concrete with a thickness of 40 cm (16 in). Inside the tower there were several walls harbouring the staircases and lift.

The cooling tower was supposed to implode keeping the rubble approximately within the same area originally occupied by the tower, while the gasification tower was intended to fall in a north-westerly direction, using its long side as a hinge line.

For the three companies involved, the main concern about the project was the safety of the working crew, as well as of anyone who wanted to watch the demolition taking place. 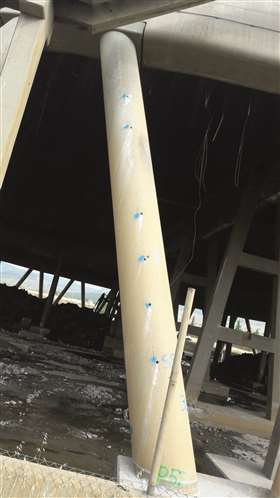 Preparations continue for the big blowdown

Another priority was to mitigate the four main environmental effects caused by the demolition’s blast.

These were the possible generation of vibrations, air overpressure, flyrock and dust. Several structures located in the towers’ surroundings required protection during the blast.

A total of 466 individual loads of 26- and 32-diameter Riodin explosives were used in the cooling tower, and a further 426 in the gasification tower. These loads were confined in blasting boreholes stemmed with polyurethane foam. The explosive charges were initiated using Riotonic DT electronic detonators to ensure a correct and precise of explosive and more than 1,000 detonators were employed in the demolition of both towers. The timing of the blast lasted 285 ms in the cooling tower and 3,000 ms in the gasification tower.

Before initiating boreholes drilling in both towers, structural engineering studies were conducted on both to certify stability during drilling and other required preparatory work before the shot.

After several co-ordination meetings with companies in the area, neighbours and local and provincial authorities, a safety and communications plan was prepared.

This gave in detail the safety and evacuation procedure to follow during the blasts.

A safety perimeter was designed with a radius greater than 1 km (0.6 mile). This could only be accessed by the explosives engineers who would be in charge of firing the shot from a safe position provided with emergency escape routes. The evacuation perimeter was properly secured by the competent authorities.

With regard to the environmental impacts, four seismographs were installed – one in the electrical substation, two in the solar power plant and a fourth one in the closest house. These were installed to make sure that the vibration levels would not exceed the limits established by Standard UNE 22-381-93. Boreholes were stemmed with polyurethane foam to reduce the airblast.

To avoid flyrock, a layer of single-twist wire mesh and another layer of geotextile mesh with a density of 500 g/sq m were installed around each explosive charge. Lastly, dust collectors and hydrants were installed to trap part of the dust. In addition, a study of the area’s prevailing winds was conducted to establish the best time for blasting. 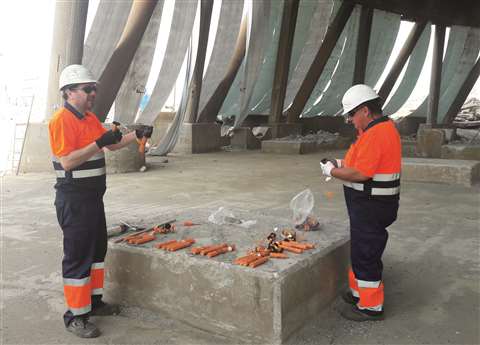 For all three companies involved in the project, the safety of the working crew was a key factor

The cooling tower fell vertically, and the resulting debris remained in the planned area, concentrated inside the pit and near the tower’s base.

After eliminating the pillars, the structure fell about 9 m (29 ft) vertically. The top, already weakened in its thicker parts due to the explosive placed in the boreholes, impacted against the floor, generating large transverse and longitudinal cracks in the thinner areas of the slab. These cracks instantly caused the structure to collapse entirely.

The gasification tower fell in the planned direction thanks to the breaking wedge generated by the explosive.

By reducing its maximum height to 10 m (32 ft) above floor level, the tower became more accessible and safer to be demolished using mechanical means.

Seismograph records reflected lower vibration values than those established in the relevant standard.

In the gasification tower the flyrock flew to a distance of approximately 100 m (3,200 ft), which was far from where the closest people were located, at 1,000 m or 32,000 ft. The only infrastructure that was hit by the flyrock was the CR504 road when the cooling tower was shot. The road was blocked to traffic and was quickly cleaned after the blast.

The adopted dust control measures were successful, as the dust that was not contained by the hydrants and collectors travelled north-east towards the neighbouring hills and road. The electrical substation and the thermal power station’s solar panels were not affected at all, as subsequently confirmed by their respective owners.

This is an edited version of the article first published in the March 2019 issue of Demolition & Recycling International. To see the full article, including additional images, or to register to receive the magazine on a regular basis, please visit www.khl.com/subscriptions