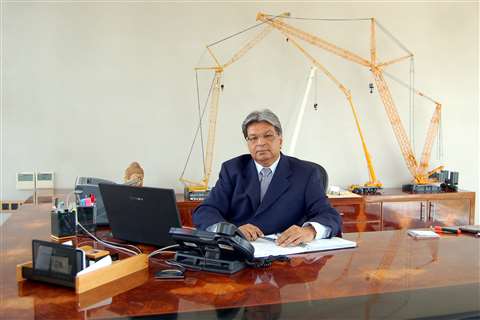 With regret ICST reports the death of Chandrakant Sanghvi, founder of Sanghvi Movers Limited (SML) in India. He died on 8 April 2019 at 65 years.

CP Sanghvi was born in 1954 in Pune, India, where he gained an engineering degree in metallurgy from the College of Engineering, Pune (COEP) and a masters degree in chemical engineering from Columbia University in the USA.

Sanghvi founded SML in 1989 with the purchase of his first crane, a new Tadano TG 700E truck crane. He took SML public in 1995, using the proceeds to buy a Demag CC 2400 crawler and other cranes. In 1998 he chartered a barge from Singapore to India and bought 36 cranes which gave him a breakthrough at the massive Reliance Industries Limited petrochemical refining complex under construction in Jamnagar, Gujarat. SML now has 1,500 employees and 17 depots around India.