Link-Belt explains its opposition to the U.S. Department of Commerce investigation into the import of mobile cranes into the United States.

ICST sister magazine American Cranes & Transport (ACT) reports that crane manufacturers selling their products in the USA are submitting public comments to the U.S. Department of Commerce’s Section 232 investigation into the import of mobile cranes into the United States. The public comments were due on Friday, 10 July.

The Commerce Department investigation stems from a petition submitted by Manitowoc Cranes late last year that claims that the import of mobile cranes into the country threaten or impair national security. Manitowoc alleged that increased imports of mobile cranes infringe on intellectual property and has badly damaged crane manufacturing in America. The investigation could lead to tariffs on cranes imported into the USA. 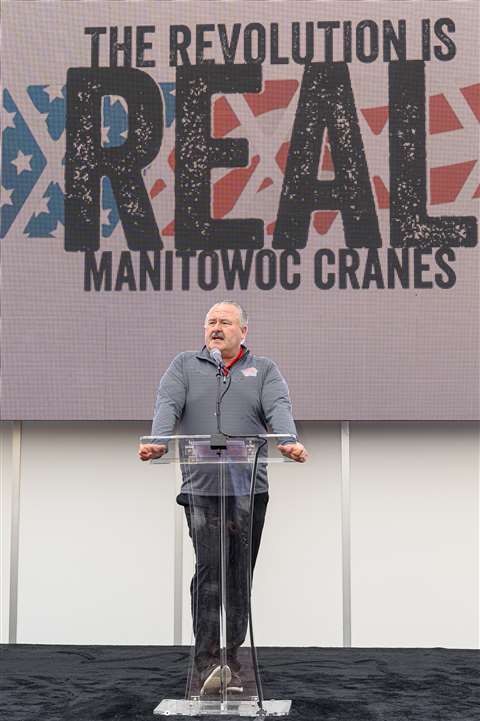 Barry Pennypacker, president and CEO, Manitowoc, at ConExpo in March 2020.

Link-Belt Cranes, which produces rough terrain, truck cranes, telescopic crawler and all terrain cranes at its plant in Lexington, Kentucky, USA, told ACT that the company has drafted out a letter to the Commerce Department clarifying some of the claims Manitowoc made in its petition and stating its opposition to tariffs.

“We are working with our legal counsel to put the finishing touches on our comments to the Commerce Department,” said Link-Belt spokesman Bruce Kabalen.

In a letter obtained by ACT sent to Link-Belt distributor principals, Bill Stramer, Link-Belt senior vice president marketing, sales and customer support, stated, “We see no benefit to tariffs or restrictions to free and open trade. In fact, we are on record as opposed to tariffs in previous Department of Commerce reviews. By their nature, tariffs that may be implemented with the best of intentions to help one segment of our economy, many times result in unexpected harm to other parts of the economy. An excellent example of this was the imported steel and aluminum tariffs, put in place in recent years, to help the US-based steel and aluminum producers compete against low priced, imported raw material. The intended results of the tariffs were that steel and aluminum raw material prices would increase for US-based producers, thus making them more capable of competing with the imports. The prices did increase, dramatically.”

“Tadano is working to complete its submission to the Department of Commerce so that the department will have the verifiable information that they need to understand the US mobile crane market and the entire industry,” said Ingo Schiller, President, Tadano America. “We appreciate the Department of Commerce’s interest in this question, but we strongly believe mobile crane imports from a diverse range of trusted suppliers, based in the US and in allied countries, bolsters rather than threatens US national security. We oppose the petition and the actions that Manitowoc has requested.”

Schiller went on to say that if tariffs are imposed, it will have a long-term negative impact on the US mobile crane industry, its customers and the American industries they support.

“We have received many questions from our customers and also from end-users of mobile cranes as they work to understand what is at stake and how they can have their voices heard on this matter,” Schiller said. “We encourage all stakeholders in the mobile crane industry to provide comments and information to the Department of Commerce.”

Tadano’s official comments to the Commerce department said that mobile crane imports do not threaten to impair U.S. national security and that imposing tariffs, quotas or similar measures under Section 232 is not necessary to protect those interests.

Sources told ACT that Manitowoc has experienced criticism from its customers regarding the petition and Commerce Department investigation.

In the Link-Belt letter, Stramer said, “As you might imagine, a considerable backlash of negative sentiment over this petition is occurring against Manitowoc by crane end-users, manufacturers (and others) as it is widely viewed as an attempt to restrict trade and ultimately bring about higher crane prices in the United States. Additionally, other industry associations and end-user markets that (while not directly related to the cranes) have concern over what such tariffs, if allowed to go unchecked, could potentially impact their business as well.”

Link-Belt told its distributor network that it cannot support Manitowoc’s petition even though there is a potential benefit to Link-Belt.

“We will be filing a formal complaint to clarify some misrepresentations in the original Manitowoc petition regarding our company structure as well as the products that we manufacture domestically. We will also oppose the tariffs and the restraint of free trade consistent with our previous stance in this regard,” Link-Belt said.

Manitowoc also sent out a letter to its dealer network explaining its actions. ACT obtained this letter, which is signed by Les Middleton, senior vice president of the Americas, and David Hull, vice president Americas, sales, at Manitowoc.

“As the last major American manufacturer of cranes, we value our role in the industry and our partnerships with you, our customer, so we think it is important for you to hear from us directly that Manitowoc continues to support free and fair trade around the world. We support this investigation in an effort to boost the entire industry and foster fair competition, not hinder the customers we depend on for our business,” the letter states.

The letter goes on to discuss crane companies that went out of business or were acquired by other companies over the past 30 years and that the deterioration of America’s industrial base has taken a toll on Manitowoc. The company’s workforce is half the size it was 12 years ago, and it was forced to close its Manitowoc facility in 2016, resulting in 600 job losses.

ICST, via ACT, will continue to follow this developing story.